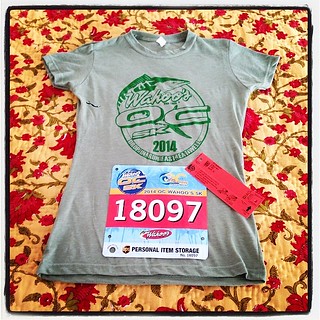 I got up ridiculously early this morning to drive down to Costa Mesa and run the Orange County 5K at 7 AM (although not as ridiculously early as a couple of my co-workers who ran the full marathon, which started at 5:30, or the half marathon, which started at 6:15). Per the half marathon training plan that I’m following I needed to run 3 miles this weekend, so the 5K fit that schedule perfectly. And the race was great! I didn’t run as fast as I would have liked to, but the course was flat, it wasn’t too crowded (the Seal Beach races were much worse), and the weather cooperated! It’s been insanely hot in Los Angeles this week and I was apprehensive about that trend continuing through the weekend, causing temperatures in the 90s, which is so rare in Southern California. Luckily it cooled down a bit today and it was actually quite pleasant during the race this morning. Running early in the day helped with that too. My official time for the 5K was 34:03, which works out to be 10:59 min/mile with no walking breaks. Not bad, but I was hoping for slightly faster. I will definitely be working on that during the short runs of my half marathon training program. (And as far as the long runs go – well, I’ll cross those bridges when I come to them.) But before I dismiss my slightly slower than expected finish, I’d like to make an interesting point. Last week when I was going out for a run and feeling a little discouraged, I told myself, “I’m only running 3 miles.” Only? When did I become a person who can run 3 miles without stopping and think it’s no big deal? This time last year I’d have told you that was impossible! It just proves that I’m capable of more than I thought. So any time I get frustrated I need to remember how far I’ve already come. Believe it or not, I think I might actually be able to call myself a runner now.

P.S. It’s a miracle! My ankles haven’t hurt during my last three runs, including the 5K today, and I couldn’t be happier about it. I’m still going to the podiatrist on Tuesday so see if I need orthotics or something like that, but I’m hoping I can avoid more pain in the future. I’ll let you know how it goes as I increase my running distances over the next few weeks.