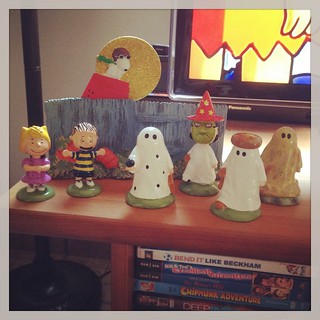 “Back in September I saw a ceramic pumpkin luminary that I loved at Pottery Barn, but by the time I got back from my month in Florida it was sold out. So I missed out on that this year.”
11/09/13 webpage post

I have a confession: I’ve already decorated my apartment for Halloween. It’s not anywhere near the scale of my Christmas decorations (no tree, obviously), and I usually wait until October 1st to put them up, but I decided that I want to enjoy my Halloween items for longer than usual this year. The weather is unrelentingly summer here in Los Angeles, so the fall décor reminds me that cooler weather will be here eventually. (As far as I’m concerned, fall can’t come soon enough.) The funny thing is, before Halloween last year I only had one item to decorate with, and that was Witch Duck. I love Witch Duck dearly, but Halloween needs more celebration than that in my apartment. So in early November I bought a couple of things on sale online in preparation for Halloween 2014. Like the Peanuts set in the above photo. Isn’t is great? “It’s the Great Pumpkin, Charlie Brown” is my favorite Halloween tradition so I was happy to find this adorable set at Macy’s. Regarding the quote from my 11/9/13 webpage post, as soon as I saw the pumpkin luminaries appear in the Pottery Barn catalogs again I bought two of them. No way I was going to miss out on them again this year! I don’t have a good photo of them yet since I haven’t bought any battery-operated candles to go inside, but I’ll get around to that soon. Another thing I missed out on last year was getting a set of Halloween-themed Minnie Mouse ears at Disneyland. I should have bought them at Disney World last September/October when I was working at Cape Canaveral, but I figured there was plenty of time to pick them up when I got back to California. I was wrong. By mid-October the orange and black spiderweb design ears that I wanted were nowhere to be found in Disneyland. So this year when I saw the Halloween items first appear in the park shops I bought a pair immediately. Yet another thing I wasn’t going to miss out on this year. Now if only some cooler weather would come along then it would really feel like Halloween is approaching!