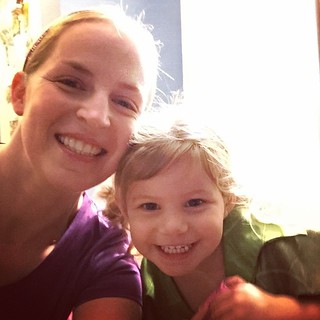 I think this may have been the best Halloween ever. Granted, it started really early when my alarm went off at 4 AM so I could turn off my Crockpot, but I went back to bed for a couple of hours after that. We were having our 3rd annual chili cook-off at work so I hauled my Crockpot full of delicious bacon chili (I called it “When Zombie Pigs Fly – Double Bacon Chili”) that slow cooked over night into the office with me first thing in the morning. As it has been in year’s past, the cook-off was a great success. We had eleven different chilis for folks to sample, as well as a wide array of sides, snacks, drinks, and desserts. All of the food I tried was delicious and I think everyone had a lot of fun. Between the chili cook-off and doing some actual work, I was exhausted when I left in the afternoon! But it was worth it to see all of my co-workers so happy. Sometimes it feels like we don’t get enough recognition for all of the amazing things we do, so something as simple as a chili cook-off really lifts our spirits. I rushed home after work so I could quickly change and go over to a friend’s house for trick-or-treating. The above photo is a selfie I took with her adorable daughter who dressed up as Peter Pan for Halloween. So precious! A few families got together so all of the kids could trick or treat together and I was fortunate enough be able to tag along. It was a blast watching the kids run from house to house in their costumes (I think they were all Disney characters, actually) gathering candy. And I got a chance to hold a cute baby! I loved it. I bailed on trick-or-treating a little early so I could go on a short run before bedtime. I missed my usual Thursday night run because I was making chili for the cook-off, but I didn’t want to completely skip a training run with the Avengers Half Marathon about two weeks away. So I ran 4 miles, took a shower, and went to bed. I was already planning to go to Disneyland in the morning to catch one last glimpse of the Halloween decorations before they are taken down. This was maybe the busiest Halloween I’ve ever had, but it was probably the best. Here’s to making November and December just as amazing!