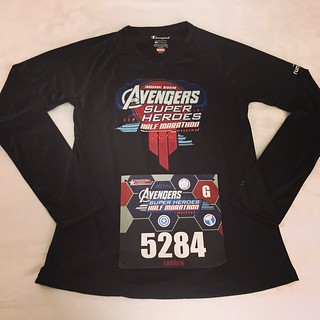 On Saturday morning I was stressed. All I absolutely had to do that day was check into my hotel near Disneyland and then go pick up my race bib for the next morning, but there was a long list of other things I wanted to accomplish as well. My first order of business was breakfast. Since I had a half marathon in the morning I considered the usual restrictions on my diet were flexible. This meant I ate a McDonald’s Sausage Egg McMuffin with zero guilt. And it was delicious. At 9 AM the Florida vs. South Carolina football game kicked off, and I started doing a few things around the house. Watching the Gators play is way too stressful without another distraction. So I make an egg casserole for breakfasts next week (and used up some eggs that were on the old side) and washed a whole bunch of dishes. I didn’t want to come home from Disneyland on Monday and be faced with a sink full of dirty dishes. Unfortunately the Gators lost their football game in overtime (after letting the Gamecocks tied the score right at the end of the 4th quarter). Boo! As soon as South Carolina secured the win and I cursed at the television a bit, I left the house to drive to my hotel in Anaheim. After unpacked my things in my hotel room I walked to the Disneyland Hotel to pick up my Avengers Half Marathon race bib, shirt, and half marathon pin at the expo. At this point it was way past lunchtime and I needed to eat a decent meal (and not just the chocolate covered pretzels I bought at the grocery store that morning) in preparation for the race the next morning. I figured my best food options were inside Disneyland so I walked over there and braved the insane crowds and the mess caused by the afternoon parade to find a meal with mashed potatoes. I was still trying to avoid grains as much as possible so I figured mashed potatoes were the best way to get some carbs in preparation for a long run. I ended up having meatloaf (which I’m sure contained grains, but whatever), mixed vegetables, and the much-needed mashed potatoes. It was pretty delicious. When I was done with lunch/dinner I decided to wander around the parks for a while, do a little shopping (my Disney pin collection is a little out of control – more on that another day), and get some hot chocolate at Ghirardelli in California Adventure. Their sea salt caramel hot chocolate is absolutely delicious and it was just cold enough for a hot drink to work wonders. Have I mentioned how lovely it is to go to Disneyland wearing a jacket? We had such a hot summer here in Los Angeles that fall so far has been glorious. I’m going to be spending a lot of time at Disneyland while the weather is this pleasant. After a few hours walking around the parks I went back to my hotel room to go to bed. My alarm was set for 3:30 AM so I wanted to get as much sleep as possible. I was out around 8:30 PM, only to be woken up by the Disneyland fireworks an hour later. It seriously sounded like bombs were going off in the hotel parking lot. They scared me to death! Luckily the fireworks lasted about fifteen minutes so I was asleep again quickly. And it felt like in no time at all my alarm was going off, telling me to get ready for the Avengers Half Marathon!