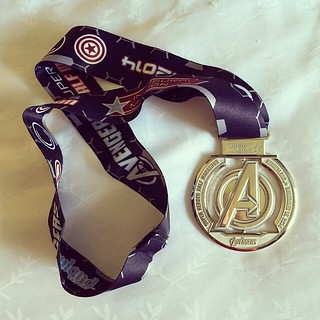 My alarm went off at 3:30 AM the morning of the inaugural Avengers Half Marathon. I hadn’t gotten enough sleep, but I knew I had to get up and eat my breakfast as quickly as possible. I brought my little blender with me so I whipped up a raspberry banana smoothie and drank it (as well as a bottle of water) while getting ready for the race. It’s always weird to slather on sunscreen hours before sunrise, but it was necessary for an approximately 3 hour race. At 4:45 AM I left my hotel room and almost immediately ran into some other folks leaving to walk to the race start line. It was a 15-20 minute walk from our hotel. Not bad, but not great. (I wanted to stay at one of the Disneyland hotels, but by the time I booked, the available rooms were way too expensive. I’ll have to be more prompt next time.) In stark contrast to the Disneyland Half Marathon in August, the pre-dawn air was actually a bit chilly! I knew I’d be plenty warm as soon as we started running so I didn’t wear a jacket to the start line, but I was shivering a bit before the race started when we were just standing around in the corrals. Fortunately everything was great around 6 AM when I finally crossed the start line. Running through the Disneyland and California Adventure and Disneyland parks is so much fun! I didn’t stop for pictures with any of the superhero characters (the lines were long and I didn’t want to stop running), but I liked seeing them as I passed by. Unfortunately not long after leaving the parks we started feeling the full effect of the Santa Ana winds that day. I had heard something about high wind advisories on the news the night before, but I didn’t think anything about it until I was running into a strong headwind at about mile 4. It was exhausting! I decided to walk during the worst of the winds because it wasn’t worth tiring myself out trying to keep running in those conditions. Later that day I discovered that the winds were 25-35 mph with 60-70 mph gusts! Crazy! But the worst part was running along the Santa Ana River Trail on the way to Angel Stadium. Not only was there a wicked headwind, but we were getting sandblasted by dirt from the dry riverbed. It was awful. Fortunately the last four miles of the race after we left Angel Stadium were more pleasant. I actually felt really good when I crossed the finish line, unlike at the Disneyland Half Marathon. I think a combination of walking more in the middle of the race (due to the winds) and much cooler temperatures helped a lot. My official Avengers Half Marathon finish time was 2:43:23, which was about 5 minutes faster than my Disneyland Half Marathon time. I couldn’t believe it! After getting my medal (see the above photo!), grabbing a bottle of mater, and having a couple of pictures taken, I started walking back to my hotel. The family reunion area at the finish line was closed because the winds were knocking down the tents. Crazy. When I got back to my room to take a shower I discovered that my skin and clothes were covered in a thick layer of dirt! It was pretty gross. Fortunately it wasn’t anything a long, hot shower couldn’t take care of.

After I cleaned up and rested a bit, I slathered myself with sunscreen (again) and walked to Downtown Disney for lunch. I figured my diet was already out the window that weekend so I splurged on Earl of Sandwich for lunch. That ham and cheese sandwich and Coke tasted so delicious after the half marathon! Since I was already close to Disneyland I decided to brave the crowds and walk over there after lunch. I couldn’t believe how many people were there. I ended up spending about four hours just wandering around the parks, shopping (I bought even more pins plus some Christmas Minnie ears), and treating myself to a chocolate milkshake at Ghirardelli. Delicious. And then I had a corn dog for dinner later. Didn’t I say my diet was out the window? (As a side note, I actually don’t miss bread since going (mostly) grain free, but I do miss certain items – like Earl of Sandwich and Disneyland corn dogs!) After dinner I was determined to see the fireworks that night (the same ones that woke me up the night before), so I staked out a spot on Main Street about a half hour early. I was completely exhausted after being awake since 3:30 AM, but I hadn’t seen Disneyland fireworks in years so I was excited. Unfortunately the fireworks were cancelled due to the winds. Shoot. At that point I was too tired to wait in line for any of the rides so I just went back to my hotel room and crashed. What a long day! But a really good one.