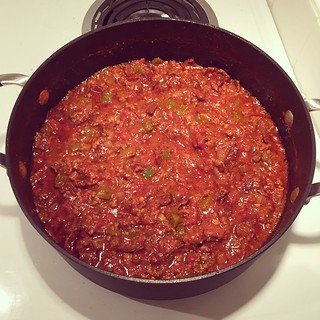 When the chili cook-off at work rolled around on Halloween I still wasn’t 100% satisfied with the recipe I had been working on. In the end I whipped up a batch that I called “When Zombie Pigs Fly Double Bacon Chili” that used a whole pound of bacon, but I wasn’t sure it would be a success. People seemed to like it (I knew the bacon would be a crowd pleaser), but I actually didn’t even taste my own concoction! I was a little afraid to considering how badly my previous batch had turned out. I’m not sure what I did differently the last time, but I threw half of that batch out because I simply didn’t like it. What a waste. I’m pretty sure the chili cook-off version was better than that since my co-workers at every last bite, but I still had a nagging feeling that it was just mediocre. So a couple of weeks ago when I decided to make a batch of chili for my weekday lunches I was nervous that it would be another flop. Fortunately I couldn’t have been more wrong. It was amazing! Here’s what I did differently: 1) I used maple-flavored bacon (the hint of sweetness made all the difference), and 2) I cooked in on the stove rather than in a Crockpot. Those tweaks turned this chili into one of the best things I’ve made all year. I even made a batch for my co-workers this week and they loved it.

Note: This chili recipe is completely customizable. If you want some heat, add a little cayenne pepper or some diced chili peppers. I can’t handle spicy food so I simply leave those kinds of ingredients out. Also, you can throw in a couple of cans of beans (drained and rinsed), like I did in the batch I made this week. Black beans and red kidney beans are my favorite. You can also use other meats or vegetables. Whatever you want! I think I’m going to try sweet potato chili next. The sky’s the limit!

DIRECTIONS:
Cut the bacon slices into 1/2 in pieces. In a large nonstick skillet (I have an aptly named chili pot that I love), cook the bacon over medium heat. Use a splatter guard if you have one because that bacon grease is hot! Once the bacon pieces are crispy, remove them from the pan and set aside for later. Add the ground beef, diced onions, and peppers to the pan with the leftover bacon grease and cook until the beef is no longer pink. Add the chili powder, cumin, paprika, coriander, garlic powder, oregano, salt, and black pepper. Stir and cook until fragrant, about 2 minutes. Add the diced tomatoes, tomato sauce, and reserved bacon and bring to a boil, then reduce heat to a simmer. Cover, and cook for at least an hour (longer if you want), stirring occasionally. Enjoy!