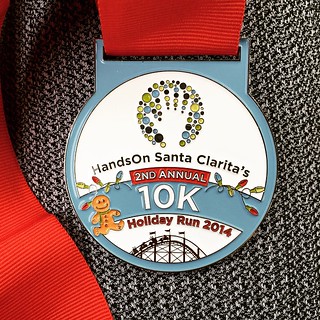 As of 3:30 PM on Friday I was done with work for the year! That was a good feeling. I had originally planned to work on Monday the 22nd, but I had put in enough extra hours the week before to cover it so my vacation started a few days early! It was lovely knowing that I didn’t have to go back to work until January 2nd. However, my holiday break started with a little bit of a hassle. I had to drive up to Valencia on Friday night in preparation for the Magic Mountain Holiday 10K the next morning. I knew it would take about an hour and a half to get there and there was no way I was going to face that drive early the next morning. Luckily I had a hotel reservation very close to Six Flags California where the race was being held. The traffic was definitely heavy on the Friday before Christmas, especially through the Sepulveda Pass, but I still got to Valencia is a fairly reasonable amount of time. The next morning it was 43 deg when I got to Six Flags. Brr! I wore another disposable sweatshirt before the race started and I was very glad I had picked one with a hood because my ears were freezing! The Magic Mountain Holiday 5K/10K wasn’t as well organized as it could have been, but it was still a fun race. I hadn’t been to Six Flags since 2012 and I enjoyed seeing the park as we ran through it. Unfortunately the course wasn’t very well marked or supervised so I made one wrong turn that added mileage to my route. Oops. And the steep hills didn’t help. I was anticipating them, and I walked up them to avoid exhausting myself, but they were still challenging! I did enjoy the downhill portions, though. And there were plenty of them, thankfully! My time still wasn’t anything to be proud of, but I crossed the finish line and that’s all that matters. Next year someone remind me not to sign up for so many races in December. The Magic Mountain 10K was my fourth and I was tired afterwards! Granted, it’s the best time of year for running, but I think I overextended myself a little bit this year.

After going back to my hotel for a shower and a little rest, I headed back to Six Flags to spend the afternoon. I can’t say I really enjoyed it, though. After spending so much time at Disneyland in the last couple of years, Six Flags suffered by comparison. I did have a good lunch, though – a turkey hotdog with stuffing and cranberry sauce. It was surprisingly delicious! I really should have tried the fried Oreos too. Unfortunately, besides he food, the rest of my afternoon was surprisingly dull. Magic Mountain is know for it’s crazy roller coasters, but the newest one was broken down while I was there. And since winter is not a popular time at Six Flags, some of the rides were simply not running at all. Phooey. Then I realized that that they don’t allow any loose articles on any of the coasters, so I’d have to put my phone in a locker if I wanted to ride any of them (like X2 and Tatsu which are awesome). It didn’t seem worth the trouble. So I spent a few hours walking around, stretching my legs after running 6.2 miles that morning, and looking at everything Six Flags had to offer. It’s not much, really. Most of the merchandise was really tacky, but I ended up buying a couple of funny holiday shirts. I intended to stay until after dark to see the holiday decorations, especially since this is the first year they’ve ever decorated for Christmas, but by 4 PM I was tired and ready to go back to my hotel. Overall, my visit to Six Flags Magic Mountain was underwhelming. I think I’ll have to go back sometime and leave my phone in the car so I can actually ride the roller coasters!