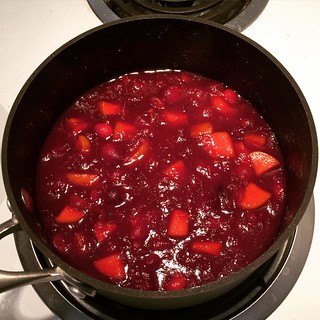 I’m working on a couple of posts about Christmas and New Year’s, but I’ve been busy this week so they aren’t ready for publishing yet. I’ll finish them this weekend. For now you’ll have to be content with this recipe for delicious homemade cranberry sauce!

On Christmas Eve I cobbled together a batch of cranberry sauce from a couple of basic recipes I found on Pinterest – one from Cooking Light and one from McCormick’s. I used elements of each one, but pretty much just threw a little bit of this and a little bit of that (including some ingredients that nether recipe called for) into the pot and hoped for the best. Fortunately it turned out great! It was the perfect complement to the smoked turkey we had for Christmas dinner, and the leftovers refrigerated really well for leftovers a couple of days later. I liked it so much that I made another batch of cranberry sauce on New Year’s Eve after I got back to California. Hey, the holidays aren’t over until I have to go back to work! (Which was actually today, but that’s another story.) I’m going to enjoy this cranberry sauce over some baked chicken this weekend. So if you have a hankering for cranberry sauce even though Christmas 2014 is over, try this recipe! Otherwise, save it until Thanksgiving 2015 and try it then!

DIRECTIONS:
In a small or medium saucepan, combine all ingredients and bring to a boil over medium-high heat. Reduce heat to medium-low and simmer 10-15 minutes, stirring occasionally, until the cranberries pop and the mixture starts to thicken. Remove from heat and cool completely. The sauce will thicken more as it stands. Serve over turkey or chicken, or as a stand alone side dish. Enjoy!