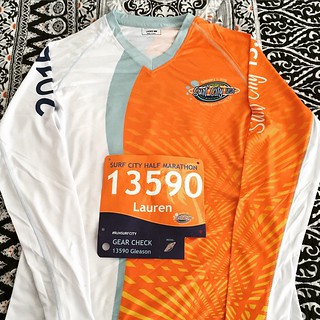 I have a lot of co-workers who are runners so we discuss training, races, and injuries quite often. After complaining about my knee problems to one of them, she gave me the name of the sports chiropractor that she and several others have gotten positive results from. And since I’d like exhaust all solutions that don’t involve drugs or surgery before taking more drastic actions, I called and made an appointment. I’d never been to a chiropractor before so I had no expectations when I first walked into the office last Monday. All I knew about the profession was a bunch of stereotypes involving back cracking that I’d seen on television. Since I was going to see this guy about my knee I was fairly certain my appointment wouldn’t be anything like that. The big surprise was how much it hurt! The treatment was more like deep tissue massage than anything else. Like deep enough to cause bruising. Yikes! It was very unpleasant, but I was hopeful that it would be beneficial in the long run. Unfortunately there was no immediate payoff since my knee didn’t hurt unless I was running. That was a little frustrating. I went back to the chiropractor on Thursday for a follow up, which was a much shorter appointment, but still painful. He told me to come back a couple of times this week as well. I still wasn’t feeling significant progress, but I figured there was no way these sessions could be harmful.

Then there’s the Surf City Half marathon in Huntington Beach yesterday. What a mess. I hadn’t attempted to run at all since the Star Wars 10K over a week earlier so I wasn’t sure how my knee was going to feel. I was nervous that even after two weeks of rest it wasn’t going to have improved at and that every step of the 13.1 miles was going to be miserable. Turns out I had good reason to be worried. When the race started I got a false sense of security because my knee felt pretty good for the first two miles or so. After that everything started to fall apart. I was able to alternate between running and walking for a while, stopping every half mile or so to stretch my legs. I thought I might be able to keep that up for the rest of the race. I was wrong. At mile 8.5 or so I lost it all together. I walked the majority of the rest of the course because I was in so much pain. It was indeed miserable. I felt like such a fraud collecting my medal after crossing the finish line because it took me significantly over 3 hours to complete that half marathon. Pathetic! But let me explain why running this race today was so important to me. The Surf City Half Marathon is the first step of the Beach Cities Challenge, which also includes the OC Half Marathon in May and the Long Beach Half Marathon in October (both of which I’m already registered for). There was absolutely no way that I was going to screw up my chances at completing the challenge in 2015 by missing the first of the three races! I would have regretted that more than any injury caused by participating. Hopefully my obstinacy won’t have lingering ramifications. Only time will tell.

So I’m wrapping up this little tale today, but the issue has by no means been resolved. I have two more appointments with the chiropractor this week so we’ll see if that helps at all. At this point I’m considering seeing an orthopedist. As much as I don’t want to admit it, my knee might need more serious attention.