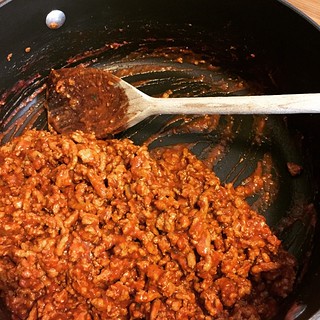 This dish was inspired by a recipe for ranch chicken tacos that I made a while back. The chicken was just OK (it might have potential with some tweaks), but adapting the recipe for ground turkey yielded much tastier results. I kept the spices the same (what’s easier than a couple of seasoning packets?), added a can of tomato sauce in place of the chicken broth, and cooked it in the skillet rather than the Crockpot. It’s incredibly flavorful and a cinch to make. It would be the perfect weeknight meal. The ranch turkey takes about 15 minutes, and then throw a spoonful into a tortilla with whatever fixings you want. You can’t miss! I must confess that since I’m avoiding grains in my diet I don’t actually make tacos with the turkey, but it’s delicious by itself so I make it quite often for my lunches. It’s a little like chili that way.

As a side note, I’ve tagged this recipe as “grain-free,” but I know the McCormick taco seasoning packet actually contains wheat in some form. They do have a gluten free variety, but it’s not the mild version so I haven’t tried it. I’m worried about it being too spicy! The obvious solution is to mix up some homemade taco seasoning, but my first attempt last year was really disappointing. I’ll have to try to again so perhaps I can make this a true grain-free dish. Healthy as well as tasty!

DIRECTIONS:
Brown the meat in a large nonstick skillet over medium heat until the turkey is no longer pink. Add the taco seasoning and ranch dressing seasoning and cook for 2 minutes, stirring frequently. Turn the heat down to low. Add the tomato sauce, stir to combine, and cook for 5-10 minutes. There’s not much liquid so it won’t really simmer, but you want the whole mixture to heat through. Enjoy!