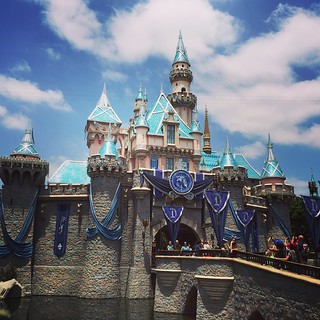 I’ve had a couple of interesting learning experiences over the last two days. First of all, I had jury duty yesterday in Santa Ana. It was the first time since I’ve lived in California that I’ve had to show up in person for jury duty. When I was in Los Angeles County I had to call in every morning for five days, but in my three summons I never had to actually report to the courthouse. That was lucky for me, but Orange County is a different story. Here you show up for one day and then see if you get chosen for a jury. I got to the Santa Ana Courthouse around 7:15 AM yesterday morning thinking I was in for an extremely long day of sitting around and doing nothing, but it didn’t turn out quite that way. Almost immediately after the juror orientation I was pulled into a 60-person jury pool for a trial and went upstairs to one of the courtrooms. The jury selection lasted all morning and part of the afternoon. I was fortunate to just sit in the audience the whole time and not get put in any of the hot seats where I would have been interviewed by the lawyers. The judge was pretty strict and shot down a few flimsy excuses that folks made to try and get dismissed. By 2:30 PM the jury had been selected and sworn in, and the rest of us were excused. That was the best outcome for me considering I have some really important stuff to do at work over the next week. So now I don’t have to worry about jury duty for another year!

One of the things I was looking forward to after avoiding jury duty was going to Disneyland this morning. I had a grand scheme in mind. The next in a series of Disneyland 60th anniversary pins was being released this morning and I was going to be there to get one this time around. Unfortunately it didn’t quite work out the way I hoped. I arrived at Downtown Disney at 6:15 AM, which was only 15 minutes after the line for the pins was supposed to start forming. But I guess that particular guideline wasn’t enforced because I noticed that the only open parking lot was pretty full and there was already a very long line. I hurriedly parked my car and queued up as quickly as I could. Less than a minute later, though, a Disney cast member told me that they already had 500 more people in line than they had pins for sale. That meant there were already 2000 people in line ahead of me! I couldn’t believe it. There was no way I was going to stand there for the next hour for something that wasn’t going to happen. Since I’d already made the drive to Anaheim I figured I’d wait for the Earl of Sandwich at to open at 7 AM and grab a delicious breakfast, at least. Then I discovered that they weren’t going to open until 8 AM (even though the website said 7 AM). And since the parks didn’t open until 9 AM today, I decided to just go back home rather than wander around Downtown Disney doing nothing for hours. So I wasted a lot of time driving all over Orange County this morning, but I learned a little bit about the 60th anniversary pin buying process. If I can make it there next month when they release another new pin I’ll be more prepared! 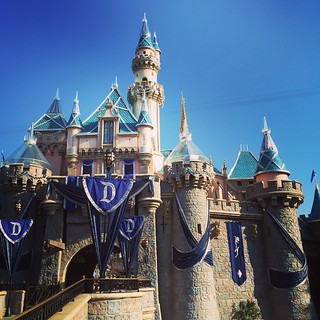 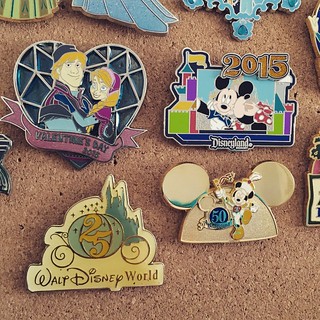 I had to work today (yes, on a Saturday), but the whole time I was there I was daydreaming about being at Disneyland instead. I should have gone yesterday when I had a day off, but it was really hot in Anaheim and I’m not ready to break out the shorts quite yet this year. Winter cannot be over already! But anyway, back to my story. In addition to all of the pins I buy at Disney parks and events, I have quite a few that I’ve gotten off of eBay as well. What usually happens is I see a pin that I like at Disneyland, but I don’t buy it before it sells out or gets retired. Other times I see a single pin in a larger set that I want to get without buying the whole thing. In both of these situations eBay is very helpful. Usually I can find what I’m looking for at a decent price. On the other hand, sometimes the pin I want is either very popular or very rare and I have to decide whether acquiring it is worth the inflated price. Specifically, the new series of pins commemorating the Disneyland 60th anniversary this year. One new pin is being released each month, but usually on days that I can’t make it to the park to buy one. And they sell out quickly. I was tempted to get one off eBay, but people are selling them for way too much there. I still haven’t given up hope of making it to the park on one of the upcoming release days, but that depends on whether I’ll be able to take the right day off work. Once I learned about the 60th anniversary pins I thought back to the Disneyland 50th anniversary back in 2005. I didn’t have an annual pass back then, but I did go to the parks with Dan and his family that summer. (It was the Fourth of July and the crowds were insane!) At the time I hadn’t started a Disney pin collection yet, but I wish I’d picked up a 50th anniversary pin or two. The good news is that people who did buy them then are now selling them on eBay! I got one for a great price and I love it. After that I thought about the Disney World 25th anniversary. That was back in 1996, and as it turns out, I was there that summer too. It was during the Mu Alpha Theta national convention in Orlando and we spent one day that week at Disney World. Buying pins wasn’t even on my radar at the time, but a couple of weeks ago I searched eBay for Disney World 25th anniversary pins out of curiosity. There isn’t much of a variety available (I don’t think pin trading was that popular back in 1996), but I did find one for a very low price. It’s adorable and it looks great with the rest of my pin collection. I like having souvenirs of those Disney trips on my corkboard, even if I had to buy them years later. Great memories! 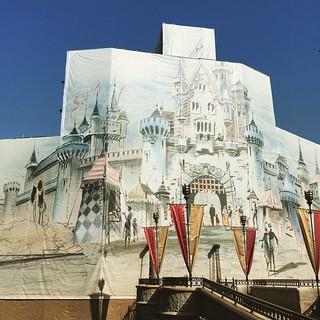 I took this picture last Friday when I spent the morning at Disneyland. (It was my day off before working all weekend, but I still had to go in to the office for a few hours that evening.) The 60th anniversary of the park is this year so Sleeping Beauty’s Castle is completely under wraps while being renovated for the occasion. I haven’t ever seen work this extensive at Disneyland. The 60th anniversary celebration this summer promises to be quite the event!

Deprecated: get_settings is deprecated since version 2.1.0! Use get_option() instead. in /blog/wp-includes/functions.php on line 4773

Deprecated: get_settings is deprecated since version 2.1.0! Use get_option() instead. in /blog/wp-includes/functions.php on line 4773