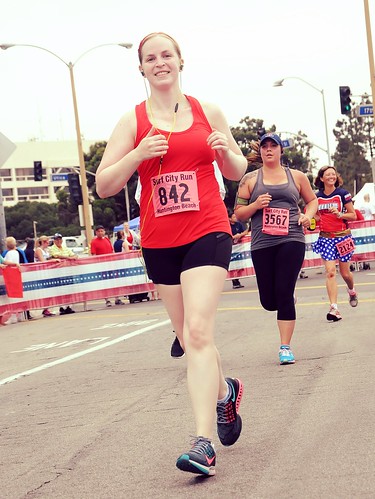 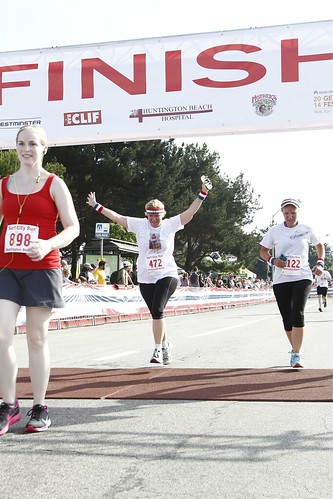 I made these absolutely scrumptious dark chocolate brownies to take to a party on July 4th. I needed something quick and easy to make after I got home from the Huntington Beach 5K that morning. When I saw how few ingredients were in this recipe I was skeptical, but the brownies turned out so great that I ate quite a few before leaving for the party. The chocolate flavor is out of this world! My only complaint is that the brownies were slightly too cake-y for me. I would have preferred for them to be a bit denser, but maybe I’ll try this recipe again with just 1 or 2 eggs. Also, I used softened butter rather than completely melt it. That might have made a difference too. But even though I’d like to tweak a couple of things, this recipe is awesome as is! I’ll definitely be revisiting it again soon!

DIRECTIONS:
In a large bowl, cream together the butter and sugar. You can use an electric mixer, but I usually just use a wooden spoon. Add the eggs and beat/stir until combined. Add the flour and cocoa powder and stir until just combined. Fold in the chocolate chips, if desired (I left them out). Spread the dough into a 9×9″ or 11×7″ pan lined with aluminum foil and coated with cooking spray. This makes for easy removal from the pan when the brownies are cool and less dishes to wash later. Bake at 350 deg F for about 25 min, or until a toothpick inserted in the center comes out clean. Don’t overbake! Cool completely on a wire rack before slicing. Enjoy!

On Friday my alarm went off at 5 AM. I was running the Huntington Beach July 4th 5K at 8 AM and I wanted to get there early so I parking wouldn’t be difficult. It was still dark when I got out of bed so I didn’t notice the pair of shoes that I left next to my closet the night before. Yes, I did indeed trip over them and fall on my face. Sheesh. I hit my right knee on the ground pretty hard so I laid on the ground for about 10 seconds assessing the damage. I thought to myself, “Am I hurt? What did I injure? Can I still run today?” Luckily I had just bruised the crap out of my knee (as of today it’s a lovely black and blue color) so my running wasn’t affected, but I still felt pretty stupid about nearly killing myself first thing in the morning. After picking myself up off the floor I threw on my running clothes, grabbed everything I needed, and headed down to Huntington Beach. I got there around 6 AM so parking was a snap! While waiting for the race to start I sat in my car, watched “Frozen” on my iPad, and ate my breakfast. Very relaxing. It had been 14 years since the last time I’d participated in the Huntington Beach July 4th race back in 2000. One of my roommates during my first Boeing internship asked me to go with her – I walked the 5K while she ran that year.

“Sarah and I got up at 5:30 AM (which is a half hour earlier than usual for those of you who don’t know what time I get up for work on weekdays). We left the apartment at 6 AM headed for Huntington Beach and the annual Fourth of July 5K race.”
7/4/00 diary entry

My only real goal for the day was to beat my previous 5K time – 34:03 from the Orange County 5K in May. That certainly wasn’t a lofty goal to begin with, but it wouldn’t be easy since it was a warm day. But despite missing the water station because it was crowded and having to take two short walk breaks because I pushed myself too hard, I still finished in 33:53! I only beat my old 5K time by 10 seconds, but I’ll take it. After the race was over I didn’t stay for the parade. It was hot and I felt pretty gross so I went home to take a shower. I fought laziness for quite a while, but then I realized I had to get up off the couch if I wanted to bake something for the party I was going to that afternoon. My first thought was to make chocolate chip cookies or pound cake, but one of my co-workers requested a chocolate dessert so I tried a recipe for dark chocolate brownies using Hershey’s Special Dark cocoa powder. Oh my goodness, they were so delicious! I ate way too many, but they were really yummy. I will have to make those brownies again soon and post the recipe too. As soon as the brownies were cool enough to cut I packed them up and took them to the July 4th party. Lots of friends, lots of fun, and lots of food. The perfect summer holiday. I went home before dark so I missed the majority of the fireworks, but it was still a great July 4th. And the best part was that I still had a whole weekend ahead of me! July 4th should be on a Friday every year.

I had a pretty quiet Fourth of July this year and it was nice. Having another day off this week felt a little strange, but I didn’t question it! I got up this morning and went to the first showing of “Monsters University” at the Block at Orange. I liked it. As far as sequels go I thought it was very good. Now I’ll have to see “Despicable Me 2” for comparison! After the movie I walked around the Block and did some shopping. The holiday sales were great so I didn’t spend very much at all on the few things I bought. On my way home I picked up a sandwich at Jersey Mike’s for lunch because I hadn’t eaten all day and I was starting to feel lightheaded. I ate my lunch at home and then conducted my second sunscreen experiment. This time the subject was Banana Boat SPF 30 Protect & Hydrate. I’m fully aware that you’re supposed to wear sunscreen everyday, but I usually opt to wear long pants and long sleeves rather than worry about slathering greasy sunscreen on my arms and legs when I go outside. I read that the Banana Boat Protect & Hydrate sunscreen feels like regular lotion on your skin so I was looking forward to trying it. Unfortunately it let me down. It didn’t smell terrible like sunscreen usually does, which was nice, and it did feel like lotion on my skin…very heavy lotion. None of the sunscreens that say “absorb quickly” ever actually live up to that promise. At least not on my skin. I am desperate to find decent sun protection that does not leave my skin sticky! But anyway, I applied the Banana Boat sunscreen and took an hour-long walk around my neighborhood. To test the sunscreen I walked on the sunny side of streets and avoided the shade. Unfortunately when I got home it looked like I had gotten some sun on my shoulders. How disappointing! Not only did my skin feel yucky, but it wasn’t completely protected from the sun! Ugh. I have a feeling the Banana Boat Protect & Hydrate sunscreen is going to end up in the kitchen at work with a note saying “Free to a good home.” So that’s how I spent my holiday. It was very relaxing and if I didn’t have so much to do at work I’d take tomorrow off too. Maybe I’ll make it a half day instead. Happy Fourth of July, everyone!