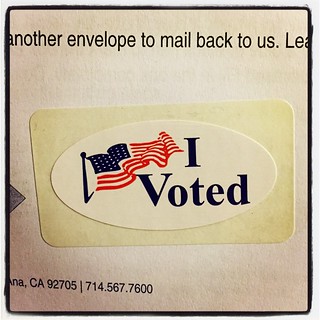 “I never thought I would ever hear Dan Rather use the phrase ‘the mother-load’ but you never know what will come to pass during a presidential election. At this moment the nation is still waiting to hear the final results of the extremely close and highly controversial election for our next president. I was quite excited to have the opportunity to vote today, even though it required me walking for an hour to do so…The need for each and every vote is critical this year, however, since the pre-election numbers were showing such small margins between Bush and Gore. For that reason I knew that I needed to get to the polls today and I was lucky that missing my lab was no big deal this week. We’ll have to wait and see how the Electoral College turns out.”
11/7/00

“As an American, I exercised my right to vote on Tuesday. In fact, I cast the first ballot at my polling place that morning. Unfortunately my vote against Arnold didn’t produce the results I was hoping for. I just want to live in a state without a weird governor! I voted against Jeb Bush when I lived in Florida, but he won anyway. I’ve voted against The Governator twice now to no avail. In fact, I’ve never voted for a winning presidential candidate either. Am I seeing a trend? At least Congress has a Democratic majority now. I’m very pleased about that.”
11/9/06

“Yes, I voted today. At 6:45 AM I was standing in a line outside my polling place hoping it wasn’t going to start raining again before I got inside. It didn’t. After explaining to three volunteers that I’m still registered under my maiden name (despite my best efforts to re-register using my married name), I cast my ballot with a few ink spots on a scantron. And now I’m going to do my best to stay away from the election television coverage until the polls close in California (8 PM PST). That’s not gonna be easy!”
11/4/08

Yesterday was the first time someone didn’t ask me, “Is this your first presidential election?” while I was standing in line at my polling place. I know I look young, but sheesh! I didn’t vote in 1996 because I wasn’t eighteen yet, but I did vote in the 1998 Florida gubernatorial election when I was in college. Mostly so I could vote against Jeb Bush, but the reason isn’t important, right? As far as presidential elections go, I voted for Al Gore in 2000, John Kerry in 2004, and Barack Obama in 2008. So this year was my fourth presidential election. Man, I’m getting old! But that’s doesn’t bother me so much because I voted for Obama again this year and he won! Hooray! I have to admit that I was a little worried before the election because having a Republican president scares me, but fortunately everything worked out as far as I’m concerned. At least now the campaign commercials, mailings, and emails will stop (thankfully I never got any phone calls) and the news channels can go back to reporting about other stuff.

I’d like to write more about this, but I have a lot to do around the house before I go to bed tonight and I have to get up at 4:45 AM to go to spinning tomorrow. And getting a good night’s sleep wouldn’t hurt either. Luckily I’ll be falling asleep in a country where Barack Obama is still president. Thank goodness. Good night!

I have a lot to say about Election Day 2012, but it’s late and I need to go to bed very soon. So I’ll leave you with this for tonight – Congratulations, Mr. President! Four more years indeed!