Boeing on the Move 2015 has started! When I woke up on June 1st I had to remember to clip on my pedometer to make sure I was getting credit for the maximum number of steps. Not only does this eight-week challenge provide motivation for me to exercise more (plus keep up with my chores and spend less time on the couch less), but earning an Amazon gift card is a pretty good bonus. As long as I maintain an average of 13,000 steps/day I’ll get a $100 gift card. And since my normal running/walking schedule makes this a breeze, it’s basically free money. I’ll take it! We’re two weeks into Boeing on the Move and I’m averaging about 21,000 steps per day so far. On the days I don’t go running I take a long walk around Seal Beach in the evenings to make sure my step count average is maintained. Also, it’s a great way to enjoy the beautiful June weather. While I was out waking tonight I found myself daydreaming about fall, but then I realized I should be savoring the beautifully cool evening that I was experiencing at that very moment! This weather makes exercising outdoors a pleasure. I know the heat of summer is right around the corner so I want to spend as much time outside as I can before those days arrive.

On a related note, on the second day of Boeing on the Move I registered for yet another Disney race. Last year when I wrote about the beginning of Boeing on the Move 2014 I mentioned signing up for the Star Wars 5K and 10K at Disneyland in January 2015. This year I made an even bigger commitment by registering for the Star Wars Rebel Challenge – a combination of the 10K and half marathon – in January 2016. The reason I’m able to do these races is because I decided not to train for the 2016 Walt Disney World marathon, which is also in January (as detailed in my New Year’s Resolution #1). There’s always a silver living, right? (Don’t worry, I’m still planning to run a marathon eventually. Hopefully the Disney World marathon in 2017.) Not only am I excited for the Rebel Challenge itself, but in general I’m looking forward to participating in the Star Wars Half Marathon Weekend when I’m not injured. Last year I was still hurt after the Disney World half marathon so I didn’t really get to enjoy the Star Wars races because I was in pain. I have every expectation that next time will be different, especially since I’ve figured out what the root cause of my knee pain is. No guarantees, of course, but I’m going to do everything in my power to stay healthy for all of the awesome fall and winter races! 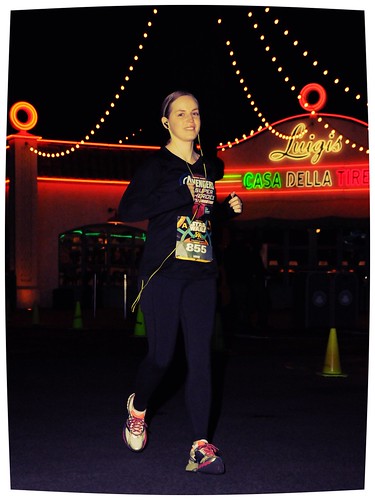 After hurting my knee during the Disney World half marathon on January 10th I was a little worried about the next couple of races I was signed up for. They weren’t too far in the future. I was flying back to LA on Monday and the Star Wars Half Marathon Weekend was happening at Disneyland the following weekend. Yikes! Back in June when I registered for the Star Wars races I decided not to try to run the half marathon since it was only a week after the Disney World half marathon. As much as I really wanted to do it (and complete my Coast to Coast Challenge in record time), I figured it was just too ambitious for me at this point in my running career. And it’s a good thing I set those low expectations since my knee problems would have made a subsequent half marathon excruciating. As a consolation for skipping the half marathon, I registered for both the Star Wars 5K and 10K to still enjoy the weekend, just with less running. After my injury I was definitely concerned that I wouldn’t be healthy enough for the Star Wars races less than a week away, but I actually felt pretty good after resting and icing my knee for a few days. So on Friday morning when I crossed the start line of the Star Wars 5K I thought everything would be fine. It was just 3.1 miles, right? Too bad my knee was hurting so much after the first mile that I had to walk the rest of the race. I was so disappointed. To avoid further injury I ended up walking almost all of the 10K the next morning too. It was probably a mistake to even do that, but there was no way in hell I was going to miss getting the inaugural Star Wars 10K medal! Maybe that makes me materialistic, but I paid quite a bit of money for that race and it was going to take a lot more than a sore knee to keep me from participating. So despite the difficulties, I crossed both the 5K and 10K finish lines, but I felt awful. About a week later I decided I needed to do something about it.

Historically January is the month that I blog the most, but this year has been an exception. January can seem relatively quiet and dull after the excitement of the holidays is over. During this winter month I normally fill my extra free time with writing (specifically documenting how I spent my Christmas vacation). Not so much this month, but it’s been an unusually busy start to the year so far! Where do I even start? I’m planning to write more on all of this soon, but here’s a little recap for now.

After New Year’s I was back to work for a grand total of three days before I was on vacation again. My five days in Orlando were pretty great! On my birthday I ran the Walt Disney World 10K and felt fantastic. Then my parents and I spent the afternoon at Disney’s Animal Kingdom (and froze our butts off!). The next morning I ran the Disney World Half Marathon and crossed the finish line injured. That was really discouraging. On Sunday we went to Universal Studios to visit the Wizarding World of Harry Potter which was amazing. I flew home on Monday and went back to work on Tuesday. Then on Thursday I went to the Disneyland Hotel for the Star Wars Half Marathon Weekend expo. On Friday morning I started running the Star Wars 5K, but quickly discovered that my knee was still injured. Very disappointing. I still participated in the Star Wars 10K the next morning, but I walked the majority of the course. At least I got my medal!

Now it’s Sunday and I’m back at home preparing for a very busy week at work. I spent the afternoon roasting vegetables and putting together lunches for the week. It’s funny, but I think this is going to be my first normal week since the holidays. I still have a lot of things I need to do before I’m caught up with all of my usual chores, but I’m already starting to feel less stressed. Phew! I’m looking forward to having a little down time to get organized, gather my thoughts, and write about the crazy 2015 I’ve had so far. And the best thing is that I know there’s so much more awesome stuff to come this year! 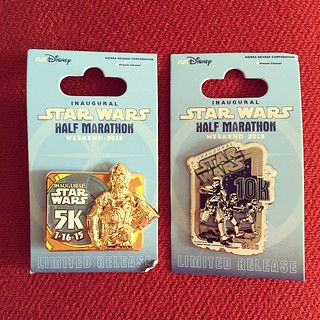 Yesterday I only had one thing I absolutely needed to do (besides work which is more of an ongoing five days a week commitment so it’s barely worth mentioning) – sign up for the Disneyland Star Wars Half Marathon weekend in January! Early registration for annual pass holders opened at 9 AM yesterday morning and I didn’t want to miss out. I’m not crazy enough to run the half marathon, but I signed up for the 5K on January 16th and the 10K on January 17th. This might still be crazy since I’ve already committed to running the Walt Disney World 10K in Orlando on January 9th (my birthday!) and then the half marathon on January 10th. Yikes! I’m going to be burning a lot of calories in January! I’m probably being too ambitious with the Star Wars races just a few days after I get back from Orlando, but this is a brand new event and I couldn’t resist. The good thing is that I’m confident in my ability to run the 5K and 10K distances without too much trouble so I can still participate in the Star Wars festivities without overexerting myself.

But this story is really just a gateway so I can can inform you that Boeing on the Move has started again! My new pedometer arrived in the mail about two weeks ago, but I didn’t remember to actually put it on until Monday morning, which is lucky because that was the first day of the challenge. Last year I earned $100 for averaging 12,000 steps per day for the duration of Boeing on the Move, and this year I’m determined to get some more free money. However, I have to average 13,000 steps per day for the same amount this year. But I know I can do it. My half marathon training plan is definitely going to help, especially with my long runs on the weekends, but I’ve been making sure to do some other form of exercise on my non-running days. I go to spinning class once a week, I do some weight training at home about three days a week, and when I have the time I like to take walks around my neighborhood in the evening. All of that equals more steps on my pedometer! It’s so much fun watching everyone check their step counts throughout the day at work. It’s so rewarding to see that number increase and know you’re doing something good for yourself. Embracing such a healthy habit is great – even if it is for the money! I definitely find myself getting up from my desk and waking around a lot more when I have that positive affirmation of the click-click of my pedometer with every step I take. It’s almost addictive! I even walk or dance around when I’m getting ready in the morning or when I’m washing dishes in the evening. Boeing on the Move is always a good experience and I plan to log more steps than ever in 2014. I’ll let you know how it goes!