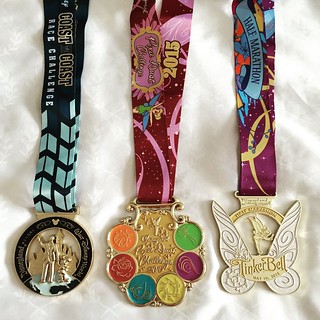 I was so excited for the Pixie Dust Challenge at Disneyland last month, but I was nervous too. When I registered for it back in August I couldn’t believe I was going to run 19.3 miles in one weekend. I wondered if it was ridiculous to even consider for a fairly novice runner like me. After successfully completing three half marathons in the fall (slow as molasses, but I crossed the finish line under my own power all three times) I felt much more confident, but then I got hurt in January and that feeling of disbelief returned. I did almost no running in February while my knee was healing, and then I had to practically start my training from scratch in March. How in the world was I supposed to finish both a 10K and a half marathon without a decent regimen? The longest run I completed prior to the Tinkerbell Half Marathon Weekend was 8 miles. It wasn’t ideal, but it was enough to make me reasonably sure that I’d be able to survive the 19.3 miles to come. I gave myself permission to run slowly and take as many walking breaks as I needed to avoid burning out in either of the races.

The Tinkerbell 10K on May 9th was lovely. The weather was cool, the sky was overcast (as I wrote about a few weeks ago), and I felt great. The course for this race was almost entirely on Disney property so it was a lot of fun. I enjoyed it more than any other Disneyland event I’ve participated in. After I crossed the finish line and got my 10K medal I walked back to my hotel for a much-needed shower. I was a little rushed because I had a brunch reservation at the Carnation Café inside Disneyland for later that morning. Fortunately I was able to get ready and walk back to the park in time. (There was a lot of walking over the weekend, in addition to all the running. My poor legs!) I had a delicious meal of eggs, sausage, potatoes, toast, and fruit to refuel after running 6.2 miles. It probably wasn’t necessary after that short of a distance, but I justified it as preparation for the half marathon the next day. I walked around Disneyland and California Adventure for a while after I finished breakfast and then went back to my hotel to rest. Not only were the races going on that weekend, but the “Tomorrowland” movie premiere was being held at the Downtown Disney AMC theater on Saturday night. Due to the crowds I couldn’t get a dinner reservation anywhere I wanted to eat so I just got some takeout lasagna (carb loading at its best!) from a restaurant at Downtown Disney and took it back to my hotel. I wanted to go to sleep early that night, but I had to wait until after the Disneyland fireworks to even have a chance. Luckily I slept well after they were over.

I woke up on May 10th and was disappointed to discover that the sky was clear. A sunny day is not good for running a half marathon. I crossed the start line of the Tinkerbell Half Marathon at 6 AM, which is right around the time the sun came up. The race course didn’t leave Disney property until almost the 6 mile mark so the first half was really enjoyable. But around mile 8 I started to get tired. Since it was my first healthy half marathon in months I allowed myself to take extended walk breaks as needed. That kept me from getting frustrated with my slow pace and I didn’t get completely exhausted. At one point I saw the 3-hour pace group ahead of me and I was determined to finish the race before they did. And I succeeded! My final time was 2:51, which is far from my slowest half marathon. I was happy! The best part was getting my medals, though. Not only did I get the Tinkerbell Half Marathon medal, but I also got the Pixie Dust Challenge medal, and my Disney Coast to Coast medal for completing a half marathon at both Disneyland and Disney World in 2015. (All three are in the above photo.) It felt so great! Granted walking back to my hotel with all of the medals clinking around my neck was a little annoying, but I was too proud to care. I had conquered my first Disney race challenge! 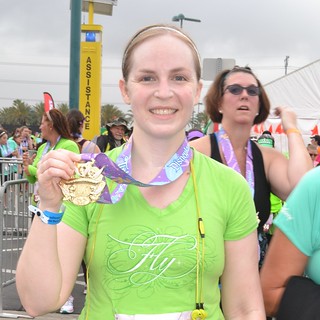 The above photo was taken after the Tinkerbell 10K at Disneyland on May 9th. See how overcast it was that day? It was glorious! Cloudy and cool – perfect running weather. The phenomenon known as “May Gray” really delivered this year. The whole month was spectacular. A few weeks ago the Timehop app on my phone reminded me that is was 100 degrees around this time last year (check out the shudder-inducing reminder here), but I loved every moment of May 2015. My sweaters, jackets, and sweatshirts got a lot of wear! Running was so enjoyable during the pleasant evenings and with a cool wind off the ocean. And the days I didn’t go running I walked around Seal Beach in the evenings to make the most of the amazing weather. We even got a good amount of rain in May! A friend of mine and I went to Disneyland on May 15th and it was pouring for the first few hours. We resorted to buying sweatshirts and ponchos in order to stay warm and dry that day. It’s so rare that we get any rain between April and October in the LA area, but it was very much appreciated during this drought. There were a couple of nights where I was awakened by storms, and I swore I heard hail one of those times. Pretty crazy. I knew the beautiful weather wouldn’t last so I spent as much time outside enjoying it before summer arrives. If the last two years are any indication, June through September are going to be uncomfortably warm. I’m definitely not looking forward to that, but luckily June has been lovely so far (“June Gloom” has been in effect in the mornings). We’ll see how long it lasts!

I’m at home this morning for one very important reason – to register for the Tinkerbell Half Marathon! Registration opens at 9 AM and it’s expected that the newly announced Pixie Dust Challenge (10K + half marathon) will sell out very quickly. The challenge might be a little ambitious for me, especially since the Orange County half marathon is the weekend before, but since it’s new I don’t want to miss out. As a Disneyland annual passholder I had the chance to pre-register last Wednesday, but I completely forgot. And by the time I got home from work that evening the Pixie Dust Challenge pre-registration was full. I felt really dumb, but at least I have another chance to register today. If I can’t get into the Pixie Dust Challenge for whatever reason, I’ll probably just sign up for the 10K. The Tinkerbell races aren’t until next May, but even with that much lead time to prepare, I’m not sure I’ll be ready for two half marathons a week apart. One of my co-workers convinced me I could do it, though, and it might not be as crazy as it seems. Even nine months in advance I’m getting a little nervous just thinking about it!