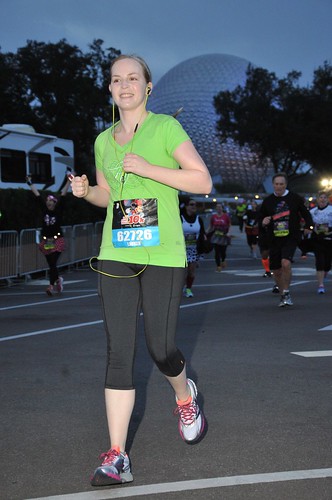 In an effort to catch up with all of the major things that have happened in 2015 (and to try and satisfy my New Year’s resolution #4), I’m going all the way back to the beginning of the year to write about my trip to Orlando in January. I figured I really needed to finally document that trip before I head back there for the Wine and Dine Half Marathon at Walt Disney World next month!

My parents joined me in Orlando for the 2015 Disney World Marathon Weekend (1/7-1/11) when I was running the 10K and half marathon. We stayed at the Coronado Springs Resort which turned out to be pretty nice. The room was basic enough, but all of the buildings are situated around a lake. We had a little bit of a walk to get breakfast at the food court every morning, but at least the lake made for a lovely route. And it was a bit chilly in Orlando that week which was both good and bad. The day before the 10K we went to the race expo at the Wide World of Sports complex and picked up my shirts and bibs for the two events. I was distressed to discover that the race pins I thought I’d ordered (and even had email receipts for) had gone awry during the registration process. Luckily I was able to buy them at the expo, but only after looking in three different places. We spent the afternoon wandering around Downtown Disney (which has been renamed to Disney Springs since then) and had dinner at Wolfgang Puck’s Grand Café. A nice pasta dinner before my first race.

The next day was my 36th birthday and we started the celebration by getting up at 2:30 AM to catch the bus to the 10K start line. Doesn’t that sound fun? Believe it or not, I was thrilled to be running a race on my birthday. And despite the fact that it was 45 deg that morning (we hunkered down in one of the event tents to stay warm before the race started), the experience was fantastic. Running through EPCOT was so much fun. My time was nothing to brag about, but I felt great. It was one of those runs that was almost effortless. That doesn’t happen to me very often so I was grateful for such a memorable run on my birthday. After I crossed the finish line my parents and I took the bus back to our hotel, showered and changed, and grabbed a late breakfast. To finish my birthday celebration we went to Disney’s Animal Kingdom Park since I’d never been there before. It was cold and there was a lot of construction going on at the park, but we still had a good time. The Expedition Everest ride is so awesome! I’d go back just for that. And we had a surprisingly good dinner at the Yak & Yeti restaurant. That night we were all tired from getting up way before the crack of dawn so we went to bed early – especially since we had to repeat the same process again the next morning for my second race.