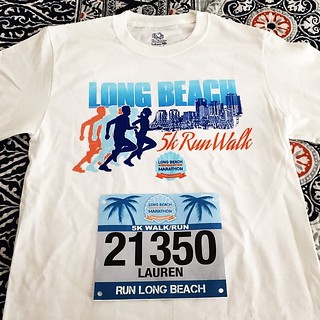 “We’d had a lot of things going on at work since the beginning of October and I was scheduled to work last Saturday, but fortunately I was supposed to have a day off on Sunday. Perfect, right? Unfortunately things started to unravel on Friday night when I got called in to work at 8 PM for a couple of hours (even though it was supposed to be my day off). However, I still managed to get to the expo on Saturday before work to pick up my race bib and t-shirt, and I even laid out all of my clothes for the 5K so I’d be ready to go quickly the next morning. Then my Saturday shift at work turned out to be much more difficult than I expected, and I didn’t get home until after 10 PM. That might have been reason enough to skip the 5K the next morning, but more compelling was the fact that I had to be at work at 8 AM (despite originally having Sunday off) when the race didn’t start until 8:30 AM.”
10/17/14 webpage post

Last year I was registered for the Long Beach 5K on October 12th, but for the reasons detailed in the above quote I didn’t get to run it. It was unavoidable, but I was definitely disappointed. This year I decided I was going to make up for it. So in December when registration for the 2015 Long Beach races opened I immediately signed up for the half marathon on October 11th. I’d walked the half marathon back in 2011, but this will be my first time running it. And then in March it was announced that the 5K was being held on October 10th so I had a chance to participate in it as well. When did I ever pass up a race? So this coming weekend I’ve got a 5K on Saturday morning and a half marathon on Sunday morning. Crazy? Not really. After successfully completing three Disney challenges (10K + half marathon on successive days) this should be totally doable, but unfortunately I’ve got a few cards stacked against me this time. First of all, the weather is going to be terrible. After getting a tiny taste of fall recently (it rained and the high was only in the low 70s on Sunday), it’s forecasted to be back in the 90s this weekend. We’ve already had a scorcher of a summer in Los Angeles, made more uncomfortable by the fact that I don’t have air conditioning at home, and by all rights we should be reaping the benefits of fall by now! It’s so frustrating. Running a half marathon is tough enough for me without the added difficulty of oppressive heat. Yesterday we got a bit of good news on that front, though. The half marathon was supposed to start at 7:30 AM on Sunday, but participants were informed that we could start the race at 6 AM with the full marathoners if we wanted to. That’s going to help a lot. You know you’re a runner when starting a race earlier in the morning makes you ridiculously happy. I might have bigger problems, though, because I have a cold. I woke up yesterday morning with a sore throat which was really frustrating. Then this morning I felt terrible so I stayed home from work to rest. I stayed in bed all morning, and then dragged myself downstairs to the couch and slept there all afternoon. When I woke up at 4 PM I felt much better. Not perfect, but definitely on the mend. I considered going for a short run this evening since I missed my planned training run yesterday, but then I realized that it wasn’t wise to push myself too much while I’m recovering. I’ll reassess my status tomorrow night. Hopefully by the time the weekend rolls around I’ll be feeling mostly healthy again. Not that I’m going to be performing at my peak anyway due to the heat, but I’d like to avoid a poor showing during the races!