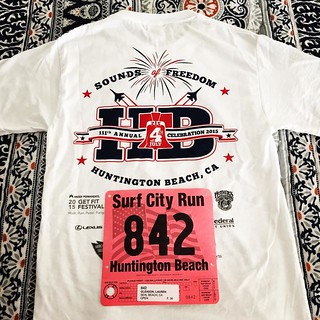 “After the races (yes there were several) were over Sarah and I stayed for the parade. Boeing had a float in the procession and we just wanted to see it before we left. The parade started at 10 AM. The sun came out. Two and half hours later the Boeing float lumbered towards us. By that time our rear ends were screaming at us, the sun had burned our exposed skin (even after we applied sunscreen that one woman was kind enough to give us), and at least half of the parade viewers had left. The float was pretty impressive but it was unfortunate for both us and them considering that it was the 315th entry.”
7/4/00 webpage post

Fifteen years ago I participated in the Huntington Beach July 4th 5K for the first time. I was years away from becoming a runner, but my roommate talked me into it. I walked it while she ran, and then we stayed for the parade where we got sunburned. Oops! Luckily by 2015 I was slightly more prepared for the event. There are actually two 5Ks in Huntington Beach every July 4th – one for HB residents and one that’s open to anyone an hour later. I was registered for the open 5K that started at 8 AM. However, in order to increase my weekend mileage I decided to run both races. I realize this is frowned upon in the running community, but I didn’t feel too guilty because the July 4th 5Ks don’t give out finisher medals so the only thing I really got for free was an extra bottle of water. Funny enough, the whole thing was actually free because Boeing was a sponsor so I didn’t have to pay an entry fee at all. Bonus! It was warmer than I would have liked that morning, but at least it was cloudy. Summer hadn’t quite set in yet, but it was close. (And as of mid-October the end date is still to be determined. Ugh.) I enjoyed both of the 5Ks even though I wasn’t exactly speedy in either one. It felt good to get 6.2 miles of running done before 9 AM! On my way home I grabbed a late breakfast at McDonald’s to celebrate as part of my usual post-race ritual. I was invited to a Fourth of July party at a friend’s house that evening and I had promised to bring food. Luckily I had taken advantage of having July 3rd off from work and did all of the cooking and baking then. I was tired after the 5Ks so I actually took a nap! Gotta love holidays. The party was a lot of fun that evening. I took a Crockpot full of chili and two kinds of pound cake with me to share. I spent a lot of time chasing kids around and also being chased around by them as well. At one point I was a Wicked Queen and got locked in a dungeon as punishment. It was a blast. Before the night was over we set off a bunch of fireworks in the driveway, much to the delight of the kids. It was classic ending to a lovely Fourth of July celebration.