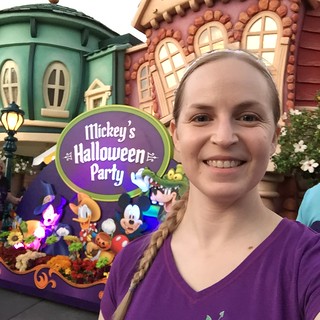 Halloween was an extended event this year. In the eight days leading up to 10/31 I had several celebratory activities planned. On Friday the 23rd I went to Mickey’s Halloween Party at Disneyland with some friends and their kids. It’s a special event at the park that includes costumes, rides, and lots and lots of candy. My friends all had elaborate costumes, but all I could muster was my Rapunzel running t-shirt and a flowered headband (also for running). Lazy, but effective! The first thing we did was go through three of the “treat trails” in Toontown, which basically consisted of walking through a few of the buildings and getting giant handfuls of candy along the way. I couldn’t believe how much we got! Trick or treating at Disneyland is lucrative (and fattening)! After getting candy my friend’s daughter insisted I go on Gadget’s Go Coaster with her. It’s a small-scale roller coaster in Toontown that the kids love. It was so much fun to ride with a three year-old. By the time we exited Toontown we decided it would be a good idea to stake out a prime spot to watch the parade in a couple of hours. So we made out way to Main Street and spread a large blanket down on the sidewalk to save space for all of us. We took turns staying on the blanket and seeing more Halloween sights before the parade. Earlier this year I attempted to watch the Paint the Night parade, which is new this year, but my view was obstructed by a bunch of rude people. This time I had a front row seat. And it was amazing! I think I enjoyed it more than the kids! Shortly after the parade there was the Halloween-themed fireworks. Disneyland sure knows how to do fireworks right. They were incredible. The families left after the fireworks, but I wandered around for a little bit longer since it was a Friday night and I didn’t need to get up early the next morning. I wanted to ride Space Mountain, but Tomorrowland was packed so I settled for buying one last Halloween pin instead. (Is there a recovery group for Disney pin addicts? I bought about eight Halloween pins this year which is ridiculous.) I got home late that night, but going to Mickey’s Halloween Party was worth it.

The first thing I had to do on Saturday the 24th was pick up a race packet for Surf City 10. I’d signed up for the 10-mile race back in 2014, but then decided to run another race on 10/25 instead. To keep my registration from going to waste I sold my bib to a co-worker. (Yes, I know it’s against the rules. I did it anyway.) I dropped the race bib and shirt (I did a little fast talking and was about to exchange my small women’s shirt for a men’s large) off at his house after picking it up. The rest of the day was more Halloween activities. I had been invited to a Halloween party at a friend’s house that evening. Trying to be helpful and ease the burden on the hosts I promised to provide chili (meat and vegetarian options) for the dinner spread, but I hadn’t gotten around to making it during the week. So that morning I made a quick grocery store run and whipped up two batches of chili as quickly as I could. For the party I threw on my old Emperor Palpatine robe since one of my friends and her family were dressed as Star Wars characters. It was another lazy costume choice, and not a very practical one because it was 90 deg that day. In late October. Would fall ever arrive? In spite of the heat I had a great time at the party, eating delicious food, playing with the kids, and chatting with friends. My beef chili quickly disappeared, but the vegetarian version wasn’t as popular. Next time I’ll remember that my friends are carnivores! The next morning I had my second of three Halloween themed races. This one was a 10-miler down in Dana Point, taking the place of Surf City 10. The reason I chose it was because it’s part of a holiday race series and I’m a sucker for extra medals. (I probably need an intervention for this particular addiction as well. In addition to the Disney pins. I’m a mess!) I wasn’t really looking forward to it since the first half was basically all uphill. And it was just as tough as I imagined, and the mostly downhill second half didn’t really make up for the uphill portion. I was pretty relieved to cross that finish line! The rest of that Sunday was spent resting after the race and being lazy. I watched the obligatory fall classics “Hocus Pocus” and “It’s the Great Pumpkin, Charlie Brown” and loved them, as always. What better way to start off my 2015 Halloween celebrations?