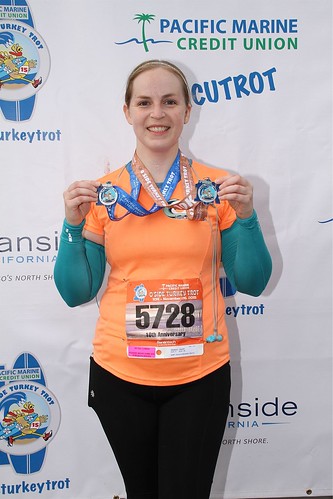 On Thanksgiving morning I woke up at 4 AM to get ready for the Oceanside Turkey Trot. What a way to start a holiday! When I was selecting a Thanksgiving race I figured why go to the closest one in Long Beach when I could drive halfway to San Diego instead? Even before the crack of dawn it was going to take about an hour to get to Oceanside from my hotel in Anaheim and I had to pick up my bib before the first race started at 6:45 AM. It was a chilly morning and even drizzling a little bit, but it was perfect for running. I was so anxious when the 10K started. My friend who was running with me did everything she could to keep my spirits up, but I was a nervous wreck. My time goal was a little ambitious and I wasn’t sure I’d be able to meet it. And at about mile 5 on the course I even said so. I was miserable and really discouraged at that point. Luckily with a lot of encouragement from my friend, and a little effort of my own, I achieved my 10K personal record! (1:09:20 which is more than 2 minutes faster than my previous PR.) I actually crossed the finish line 40 seconds under my goal which felt amazing! I definitely couldn’t have done it on my own so I was incredibly grateful to have a friend to push me to finish what I started. We got our 10K medals, crammed them in our pockets, and walked back to the start line for the 5K that was starting at 8:30 AM. I’m not sure why I thought a 5K right after running my fastest 10K ever was a good idea, but it turned out to be a nice relaxing cool down after a rough 6.2 miles. I walked about half of it, but I figured I’d earned it! The home stretch of the races was on the Strand, which is right along the edge of the Pacific Ocean. Due to the unusually high tides we were dodging waves that crashed on to the Strand during both the 10K and the 5K. It was a little surreal. Fortunately I was able to avoid the worst of it and keep my running shoes dry. After the 5K I collected my second medal, posed for the above photo, and got ready to drive an hour back to Anaheim. The Oceanside Turkey Trot had been very successful and I enjoyed both courses. I’d consider doing those races again in the future.

On my way back to Anaheim I stopped at McDonald’s for breakfast. I’d earned an Egg McMuffin after running 9.3 miles! I’d also earned a hot shower and a nap at my hotel. While I was recovering from the races I watched the annual Mystery Science Theater 3000 Turkey Day Marathon online. I love MST 3K, but there just aren’t enough opportunities to watch it anymore. The Thanksgiving marathon is always a treat. (And with the already highly successful Kickstarter to bring back MST 3K, I’ve got new episodes to look forward to next year!) When the evening rolled around I walked to Downtown Disney ahead of my Thanksgiving dinner reservation. I did a little shopping before wandering over to Steakhouse 55 at the Disneyland Hotel for dinner. I’ve heard good things about the restaurant, but unfortunately the service was terrible on this particular night. I don’t know if they were overbooked or understaffed, but I was seated late and there was way too much time between courses. I ordered the Thanksgiving tasting menu which included butternut squash soup, turkey wellington, and a trio of holiday desserts. It was surprisingly affordable, but the food was just mediocre. The soup and turkey (which was more of a pot pie) were ok, bordering on good, but the dessert was really disappointing. I should have just ordered a steak from their regular menu. Oh well! I’ll make sure to eat somewhere else next year (and try Steakhouse 55 again on a day other than a major holiday). After dinner I briefly walked through both Disneyland and California Adventure. The parks weren’t that crowded, but I was too tired to spend a lot of time there. I did buy a Frozen holiday pin to add to my collection so the night wasn’t a total waste! After walking back to my hotel I wrapped up Thanksgiving 2015 with more of the MST 3K marathon and an early bedtime. I needed to be ready to meeting some friends first thing the next morning at Disneyland so we could get Fast Passes for the new Hyperspace Mountain. More on that in my next holiday wrap-up post!