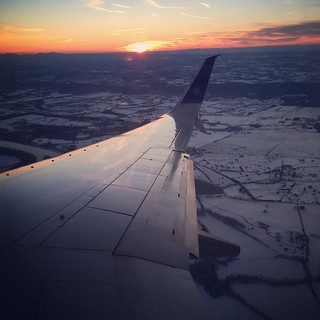 I made a mistake this morning. Considering all of the difficulty on the East Coast due to the blizzard last weekend I should have checked my flight status before I left for the airport, but I didn’t. As soon as I parked my car and caught the shuttle to the airport I found an email in my inbox informing me that my flight to DC was delayed – by two and a half hours! I thought I was running late while getting ready to go to the airport this morning, and I was actually a little worried about not being able to grab anything for breakfast before getting on the plane. Little did I know I could have stopped for a leisurely morning meal on the way! As it was, I got to sit down and have a nice egg sandwich after going through security, and then I had enough time leftover to wander around the United terminals for over an hour. It was boring, but luckily I had no reason to get to DC by a certain time today. Before takeoff the pilot explained the delay – the plane that was originally assigned to our flight was coming from Hawaii this morning, but it had to divert for some reason and obviously didn’t make it to Los Angeles on schedule. Weird. Funny enough, after everything the region had to deal with this week, the delay had nothing to do with the weather!

I didn’t get as much sleep as I should have last night because I had too many things to check off my to do list before going on my trip. I left work early yesterday so I’d have more time to prepare. My first order of business when I got home was baking the three batches of cookies that I promised my East and West Coast co-workers. I didn’t want to make them earlier in the week because I was afraid they’d dry out and get stale before anyone got to eat them. The cookies I ended up making were slightly different from what I described in my previous post. The “classic” chocolate chip cookies ended up including browned butter, bacon fat, and molasses. And they were amazing! (I sampled quite a few while slicing up the cookies. This is why I limit my baking these days!) I will share that recipe later this week. Of the other two batches of chocolate chip cookies, one had a full pound of cooked and crumbled bacon mixed into the batter, and the second had some reconstituted dried cherries (but no liquor as I originally planned). After the cookies were done I seriously considered skipping my planned 5-mile run because I still needed to finish packing my suitcase and attempt to get to bed at a decent hour. I figured I could hit the treadmill after arriving in DC instead. But then I remembered how much I hate running on the treadmill so I threw on my shoes and went for a run on the sidewalks of Seal Beach instead. There’s a possibility that it will be warm enough for me to run outside while I’m in DC, but more than likely I’ll be stuck on the treadmill in the hotel fitness center instead. It’s not ideal, but there’s no way I’m going to miss any of my training runs this week. The Surf City Half Marathon is next Sunday and I need to be ready! But I digress. I stayed up too late last night getting ready for my trip, but it was worth it. I will sleep well tonight!