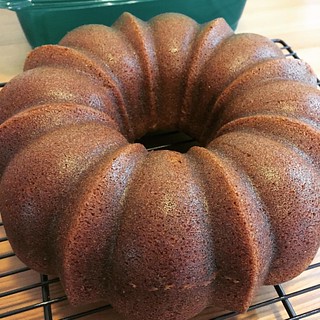 When September rolls around it means that it’s late enough in the year for me to bake with pumpkin again, but somehow I waited eighteen days to take advantage of that freedom in 2016. What a shame! But I think this pumpkin bread was worth the wait. I first tried this Taste of Home recipe over a decade ago with great success, but one of the ingredients was a tad problematic. Finding cook-and-serve vanilla pudding in 3 oz packages was impossible! I had to buy a larger box and just roughly guess at the right amount to pour into the batter. It was annoying so I found other recipes to try instead. But this year I was browsing the grocery aisles and found the little 3 oz pudding packages! It was a sign that this tried-and-true pumpkin bread recipe needed to make a comeback this fall.

As I was baking today I did make a couple of minor changes to the Taste of Home recipe. Actually, they were more like augmentations. The original recipe called for just 1 teaspoon of cinnamon as seasoning, but one of my other go-to pumpkin bread recipes (see my spiced pumpkin bread recipe here) calls for a host of other spices as well. So I also included nutmeg, cloves, ginger, and pumpkin pie spice in today’s baking endeavor. Similarly, I added 2 teaspoons of vanilla because it makes everything better. The result was absolutely fantastic. In spite of being on a diet I tried a piece this evening. This may be the best pumpkin bread I’ve ever tasted! The perfect fall treat to share with my co-workers tomorrow!

DIRECTIONS:
Beat the eggs in a large mixing bowl with an electric mixer. Make sure it’s a really big bowl because this recipe makes 2 loaves which means a lot of batter! Add the canola oil, pumpkin puree, and vanilla and beat until smooth. Add the cinnamon, nutmeg, cloves, ginger, pumpkin pie spice, and salt and beat until combined, scraping down the sides of the bowl with a rubber spatula as needed. Add the vanilla pudding mix and baking soda and beat until combined. Lastly, add the flour and sugar and beat until combined. Pour the batter (it’s pretty thin and easily pourable) into two 8×4″ loaf pans coated with cooking spray. (I only have one loaf pan at the moment so I used a 12 cup bundt cake pan instead. If you go this route make sure that every nook and cranny of the pan is coated with spray because you don’t want the cake to stick!) Bake at 325 deg F for 70-75 minutes or until a toothpick inserted near the center comes out clean. Cool for 15 minutes before inverting the loaves (or cake) onto a wire rack. Cool completely before slicing. Enjoy!

Based on Taste of Home’s Delicious Pumpkin Bread.