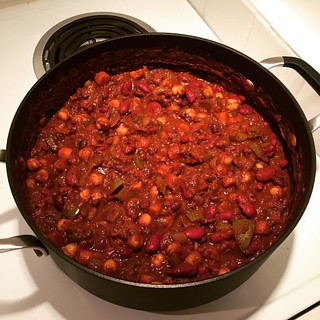 On Monday we had our 5th annual chili cook-off at work. It’s a Halloween tradition! It’s also one of my favorite days of the year (maybe second to the annual holiday potluck) and I’m happy to say that even though it was a lot of work it turned out really well. Due to being on the Nutrisystem diet since Labor Day I didn’t get a chance to make any test batches of chili before the cook-off. What a shame! So on Sunday night I simply combined a couple of my favorite old recipes, crossed my fingers, and hoped for a decent outcome. I figured mixing and matching successful recipes couldn’t go wrong! In order to please several non-carnivores at work I promised to make something that was vegetarian friendly. I started with my vegetarian chili recipe, but substituted the spices from my Cincinnati style chili that I made for last year’s cook-off. To my surprise it was absolutely delicious, and actually came in fourth place out of 16 chilis in the popular vote. So in the spirit of Halloween, making a Frankenstein’s monster-style unholy mashup using pieces from different chili recipes can result in something better than the sum of its parts!

Speaking of unholy mashups, the pumpkin bread I made for the chili cook-off got a similar treatment. I originally planned to make a sheet cake, and I even bought some new Halloween sprinkles to decorate it, but some of my co-workers requested pumpkin bread instead. On the plus side it’s easier to throw together, and I already had a can of pumpkin puree in my cupboard so that’s one less ingredient I had to purchase! But which of my favorite recipes to use? The one I posted in September was the best pumpkin bread I’ve ever tasted, but when I tried something different a couple of weeks later I got even better feedback from the taste testers. What a conundrum! In the end I used the recipe from September (mostly so I could avoid buying buttermilk which I never managed to use all of before it spoils), but with a couple of key changes. First of all, I substituted half of the white sugar for light brown sugar for a richer flavor. But more importantly I used a different spice combination:

The result was absolutely incredible! Not only did my co-workers gobble it up, but I loved it too. I’ll have to remember that for next year. The moral of today’s story is that experimental cooking can sometimes turn out even better than you could possibly imagine. So be brave and try something new! I am going to try and keep that in mind with the rest of my holiday baking. ‘Tis the season to be bold!