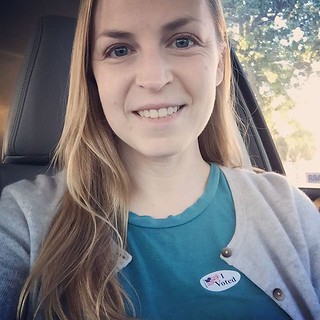 “At this moment the nation is still waiting to hear the final results of the extremely close and highly controversial election for our next president. I was quite excited to have the opportunity to vote today, even though it required me walking for an hour to do so. In order to make the trip and cast my vote I had to skip my experimental methods lab section. The need for each and every vote is critical this year, however, since the pre-election numbers were showing such small margins between Bush and Gore. For that reason I knew that I needed to get to the polls today and I was lucky that missing my lab was no big deal this week. We’ll have to wait and see how the Electoral College turns out.”
11/7/00 webpage post

Sixteen years ago was my first presidential election. I was at the University of Florida and I had to skip a class to cast my ballot, but I knew it was important. (Yes, that was the year of the big ballot controversy in Florida. But in Alachua County we used a marker to fill in circles on a scantron, so we didn’t contribute to that debacle.) As much as I was concerned about the result of the 2000 presidential election (which didn’t go the way I wanted it to) I believe this year is even more critical. After electing and then re-electing the first African-American President of the United States we are on the brink of stopping the progress of the last eight years dead in its tracks. It’s incredibly scary. So I earnestly voted for Hillary Clinton and returned my absentee ballot the day after it arrived in my mailbox. After that I tried not to worry about the election, but it wasn’t easy. And tonight I am actively avoiding the news and social media. I will learn the results tomorrow morning when I wake up. Don’t let me down, America.