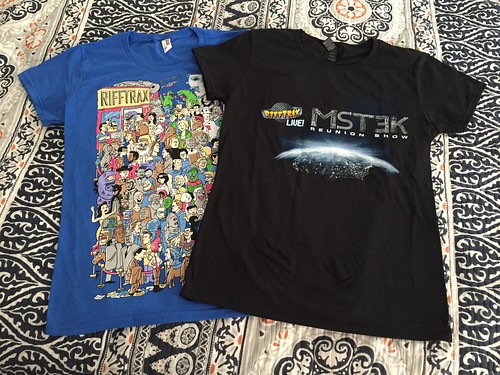 I planned to use some of my free time after the Avengers Half Marathon today to write a comprehensive blog post about my weekend, but my brain just wasn’t up to it. After exhausting my body running this morning all I wanted to do was watch TV and zone out on the couch. So that’s what I did! But in order to continue fulfilling my NaBloPoMo commitment I need to write at least a little something today. Here it is!

When I got home from Anaheim this morning there was a package on my doorstep. I wasn’t expecting anything so I was intrigued. When I sliced open the envelope two t-shirts fell out and I was pleasantly surprised. They were my backer reward shirts for supporting the RiffTrax Live MST3K Reunion Show Kickstarter campaign! The campaign was launched in March and given my love of both RiffTrax and MST3K I couldn’t resist pledging some money. The reunion show itself was in theaters back in July and I attended it with a good friend. It was a lot of fun. But before I discovered those t-shirts on my porch this morning I had completely forgotten that I was owed them! That’s what happens when it takes four months after the actual event is over for the merchandise to arrive. I won’t complain about awesome new shirts, though! I wore one of them to see “Doctor Strange” tonight. (Great movie! I highly recommend it!) Now I’m just waiting for my backer reward shirt from the Bring Back Mystery Science Theater Kickstarter that I contributed to last Thanksgiving. Believe it or not, it’s been almost a year! But if this is the price I have to pay for new MST3K shows I’ll gladly accept it!