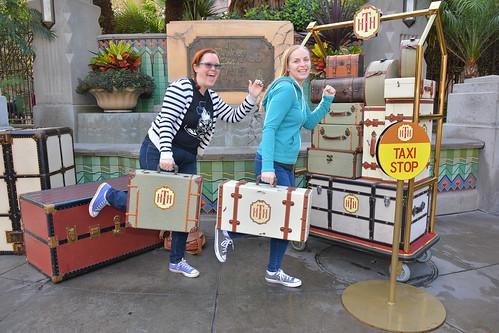 It’s the Sunday before Thanksgiving and instead of being responsible and productive I did something completely frivolous – I spent the day at Disneyland! I went with my good friend Natalie and we had an incredible time. The theme of our trip was Tower of Terror since the ride in its current incarnation is closing on January 2nd. Since Disney announced that they are converting the building into a “Guardians of the Galaxy” attraction in 2017 the responses have been mixed. While Disneyland is always changing in on way or another (like the ongoing construction of Star Wars Land that’s supposed to open next year) it’s a little sad to see such a unique landmark be completely overhauled. Due to the imminent shuttering of the Hollywood Tower Hotel it has become the most popular ride in the parks with long lines and quickly disappearing Fast Passes. When I was there last weekend the wait time was 150 minutes! Yikes. So in order to make sure we got on Tower of Terror without spending hours in line, Natalie and I headed directly there as soon as California Adventure opened for the day. That was what we’ll call ToT #1, and it was amazing. After our first experience we walked across the street and got Fast Passes that we could use an hour later. After some coffee, hot chocolate, and a little shopping we made use of the FPs – that was ToT #2. We were lucky enough to be in the front row that time and the photo that’s taken on the ride turned out great. You’d think two times through Tower of Terror within an hour and a half would be enough for us, but you’d be wrong! Upon exiting we got another set of FPs for a little later in the morning. While waiting to use those we made our way over to Disneyland and got Fast Passes for Hyperspace Mountain, my favorite. But then it was time to get back to California Adventure for ToT #3. After walking out that third time we figured there was no use tinkering with a successful formula and so we picked up a third set of FPs for the afternoon! At that point it was time for a delicious lunch at Carthay Circle and then Hyperspace Mountain over in Disneyland. Due to crowds and a little rain we almost didn’t use our last Tower of Terror Fast Passes, but there were some Christmas presents that needed to be purchased in California Adventure so there was no use letting them go to waste! That was ToT #4 – our final check-out. I’m not happy about it, but I’ll be content if I don’t find my way to the Hollywood Tower Hotel again before January 2nd. Thanks for all the great memories!

Photos from all four ToT experiences will be available in my Disneyland 11/20/16 photo album once I am able to download them from the Disneyland PhotoPass website!