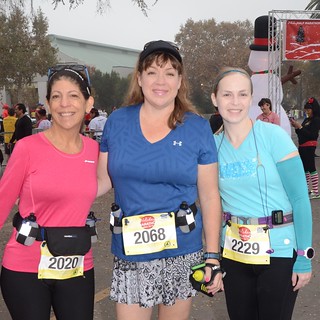 “I don’t think the promise of an extra medal will tempt me to return next year, though. That half marathon course was killer and I’d honestly rather not repeat it.”
12/20/16 webpage post

It’s funny how often I’ve vowed never to run a particular race again, only to find myself back there at some point. I this case it took me two years, and encouragement from my running buddies, for me to sign up for a repeat of the Golden Snowflake Challenge. The first time I ran the Holiday Half Marathon two years ago I hated how hilly it was. I wasn’t all that used to running long distances (I think it was only my third half marathon?) and my overall fitness wasn’t the best, so the uphill portions of the course were not enjoyable. Luckily things were different this time around.

Last Saturday morning was the first part of the Golden Snowflake Challenge – the Holiday 5K. The first half or so of the 5K course is steadily uphill, but then it finishes with a lovely gradual downhill that makes you feel like you’re flying. I was prepared for that this year and I was excited to see how well I could handle it. The first two miles were just OK, averaging about 10:30 min/mile which wasn’t terrible, but then the amazing downhill portion kicked in. My last mile was under 10 minutes, which earned me a 5K PR of 31:45 minutes! That’s 2 minutes faster that I ran the Long Beach 5K back in October so I was really pleased. The fall is definitely PR season thanks to the rigors of marathon training and running with friends who push me to increase my pace. It’s a lot of fun!

The Holiday Half Marathon on Sunday morning wasn’t quite as fun. Not only did we have to tackle those same hills that I hated in 2014, but it was drizzling heavily on us for most of the race. The temperature was in the 50s which was great, but thanks to the rain we were pretty soaked. The good news is that since I’m in much better shape these days the hills didn’t feel nearly as difficult as they did two years ago. Still challenging, but I was able to maintain my running intervals without taking extra walk breaks on the inclines. In spite of our legs feeling incredibly sore from boot camp on Friday and the 5K on Saturday, my running buddy and I finished the half marathon in 2:35:06. It wasn’t a PR for me (I hung back a bit to run with her), but it’s still really good compared to some of our other race times from earlier this year. That’s 20 minutes faster than the OC Half Marathon. We’ve both improved so much since May! It was a great way to end the 2016 race season. Here’s to an even better 2017!