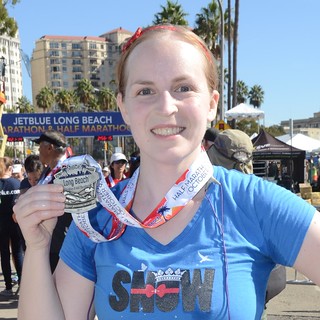 “So I got my Beach Cities Challenge medal in October, but I must admit that I didn’t really earn it.”
12/20/15 webpage post

I’ve already written webpage posts about the Surf City half marathon 2016 and the OC half marathon 2016 so I won’t rehash those here. The Long Beach half marathon 2016 was by far the best anyway. By October I had a few things going for me – 1) I’d been training consistently for about 5 months, including over a month of marathon training, 2) I’d lost weight, and 3) I’d already earned a new half marathon PR at the Disneyland half marathon in September. Due to the unusually high temperatures that weekend (similar to the year before) I had no time goal for the Long Beach half, but my running buddy was more ambitious. So we did our best, running as fast as we dared before hitting the most challenging portion of the course. From about mile 6.5 to about mile 9.5 the race follows a walkway on the beach with no shade for protection from the sun, which was high in the sky when we got there. It was not fun, but we survived without slowing down too much. And after that we had to tackle the uphill stretch that led to the finish line. We slowed down a bit there due to the weather and probably some dehydration. I’m not sure I’ve ever been so happy to finish a race! I didn’t check my watch until after we were done, but at that point I discovered that I had earned a new PR – 2:34:18! We didn’t quite meet my running buddy’s goal, but we did pretty well in the heat. I was more than satisfied. And along with my half marathon medal I collected 2016 Beach Cities Challenge medal with pride. I had earned it this year! And I already have plans to complete the challenge again next year. Maybe running one of the full marathons even? We’ll see!

P.S. My current half marathon PR is actually 2:27:44 at the Avengers half marathon in November. Marathon training has done wonders for my personal records!