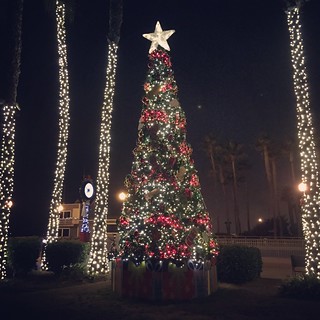 It’s been a busy Christmas Eve and I’ve barely left the house! I considered going back to Disneyland for a few hours, but I decided to run a couple of errands first thing this morning instead. I was invited to a party tonight and I wanted to make another batch of cranberry BBQ meatballs to take with me, but I needed a few ingredients first. So I rushed over to Target and Ralph’s before 8 AM to get the necessary components before the crowds of folks buying last minute gifts descended. It wasn’t the most relaxing shopping trip, but it could have been much worse, considering it’s Christmas Eve. When I got home I mostly tackled a bunch of dull chores that I won’t bore with here, and then I got started on my biggest job for the day which was wrapping Christmas presents for friends. Luckily they aren’t needed until Monday, but I got them done while I had a chance. It took me much longer than it should have to wrap six boxes, but they look pretty good. I also watched a couple of classic Christmas movies at the same time – “Miracle on 34th Street” and “Christmas in Connecticut.”

It’s getting late now and I need to go to bed soon. I went to the party at my friend’s house this evening and ate a lot of delicious food. More than I should have since I am going for a long run in the morning! Since I didn’t attempt any other form of exercise today I intended to take a walk around Seal Beach tonight to look at the Christmas lights (something I can’t sufficiently admire while running), but I was just too tired when I got home from the party. I’ll make up for it when I run tomorrow morning. It’s Christmas and I’ll run if I want to! Happy Christmas to all, and to all a good night!