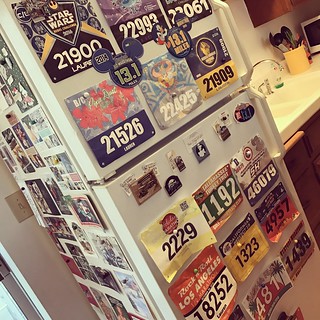 New Year’s Resolution #1: Donate some of my old medals and scrapbook my old race bibs

I’m starting this year off with an easy resolution. Relative to some of my past ones, that is. I’ve been accumulating medals and bibs from races since the spring of 2014 and I’ve never really figured out what to do with them in the long term. Race medals from the current calendar year get hung up on the wall of my cubicle at work, which slowly but surely adds a garish amount of sparkle to my workspace over the course of twelve months. But then every January the previous year’s accolades come home and get stashed away in a box under my bed. In the beginning I had every intention of hanging all of these hard-earned medals on the wall in my bedroom, but over time I realized that I didn’t really want to. It’s not that I don’t enjoy receiving the medals as recognition of my accomplishments, but I don’t have the drive to display them anywhere afterwards. Over the holidays I sorted through the box of my old race medals from 2014 and 2015 and decided that most of them weren’t worth keeping. There’s a charity called Medals 4 Mettle that gives donated medals to sick children so I think I’ll send a portion of my collection there. Hopefully I can get that done soon. As far as race bibs go, I have a huge stack of them in the same box as the old medals. The most recent ones get displayed on the front of my refrigerator, as you can see in the above photo (Disney ones get top billing), but after their tenure there is over they are filed away. Some of the bibs are so nondescript that I probably should have just tossed them, but others are lovely souvenirs from of races that I’ve loved (and others I’ve hated). Luckily race bibs are small, thin, and light so I think I’ll keep them as a reminder of my progress over the last few years. My goal for 2017 is to put all of them (OK, maybe not the ones that I can’t even remember what race they’re from) in a scrapbook or album for future reference. Neither of these goals is too difficult, right? Now if I can just follow through before the year is over!