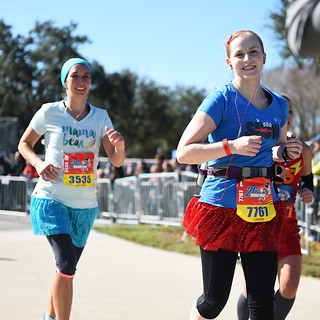 I got to Orlando without too much trouble on January 6th. It was my first time having TSA Pre-Check clearance and I definitely enjoyed it. Not having to take off my shoes or jacket, and being able to leave my laptop in my backpack when going through security was definitely worth the minor hassle involved in getting cleared. When I arrived at the Boardwalk hotel at Disney World my parents and I had some pizza for dinner and made sure to get inside before the storms arrived that night. Even wearing earplugs the thunder and lightning woke me up overnight. It was quite the storm. Run Disney preemptively cancelled the half marathon for the next morning due to the storms so a lot of runners were not pleased. It was the best choice for everyone’s safety, but I understand their disappointment.

Due to the rain we did almost nothing the morning of January 7th. The only thing I absolutely had to do that day was go to the expo and get my race bib for the marathon the next morning, but we waited until the rain was just about over before attempting that trek. The expo was a madhouse with not only the marathoners picking up their things, but also the half marathoners returning to get their medals for the race that didn’t take place. Some of them were really dedicated and ran 13.1 miles in the rain earlier that day so that they felt like they truly earned the half marathon medal. I applaud them for the extra effort, but I’m not sure I would have done it! Most of Saturday afternoon was unproductive due to the time required to get to and from the expo with the added ridiculous number of cars and buses that were trying to get to ESPN Wide World of Sports in the bad weather. It was nuts. Fortunately I picked up my bib and shirt, and purchased a skirt for the next morning, without too much trouble. That night I had a delicious pasta dinner at Trattoria al Forno (conveniently located at the Boardwalk hotel where we were staying) in preparation for the marathon the next morning. I went to bed as early as I could manage, but I was really nervous about the upcoming race.

My alarm went off at 2:30 AM on Sunday January 8th. I got dressed and ready for the marathon as quickly as I could because I wanted to be on the bus to the start line at 3 AM. After the storms went through the previous day it was extremely cold on Sunday morning. I had arm warmers, gloves, a fleece jacket (courtesy of my mom), and a mylar blanket, but it still felt frigid outside. I had the foresight to sign up for Race Retreat which gave me access to a tent and breakfast before the race, but it was only marginally warmer inside. I could still see my breath as I was eating my banana with peanut butter! I was a bundle of nerves waiting for the race to start. I’d never run 26.2 miles before and I had no idea how it was going to go. I met my old high school friend Missy at 4:45 AM and we started the long walk to Corral L. While we were moving it didn’t feel that cold, but standing still was awful, especially when the wind was blowing. We were huddling close to strangers and stomping our feet to stay warm, but neither was really working. We finally crossed the start line around 6:20 AM (being in the 12th corral didn’t do us any favors that morning). I was so glad for all of the layers I had on even after we started running. I only took off my fleece jacket around mile 5, right before we reached the Magic Kingdom, and I kept the gloves on even longer because my hands felt so toasty warm. The arm warmers stayed on a bit longer, but had come off by the half marathon mark. The sun was plenty warm by that point, but anytime we ran through the shade we got a reminder of how cold the air still was. I was feeling pretty good for a majority of the race, but between mile 17 and 18 it started to go downhill. My stomach was upset and I was tired, and I basically felt like garbage. I expected to get a second wind eventually, but it never happened. Luckily I had Missy with me for moral support and we crossed the finish line in 5:28:41 which is a lot faster than I expected for my first marathon! I wasn’t in great shape after the race, though. My knee hurt, my foot hurt, and my body started going into shock when I got back on the bus to my hotel. Luckily a hot shower, a piece of pizza and a Coke, and some rest helped. Many hours of rest and relaxation later my parents and I walked over to Epcot. My foot was still really hurting, but I figured it would pass. I purchased the Disney World New Year’s pin that I wanted and we had a fabulous dinner at Spice Road Table that night. It was the perfect end to my marathon day!