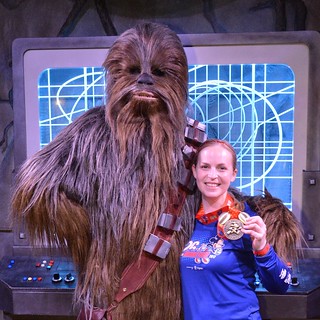 I had big plans for my birthday (January 9th) at Disney World, which just happened to be the day after the marathon. To celebrate not only turning 38, but also successfully completing my first 26.2 mile race, I had several reservations booked throughout the day at different Disney parks. First was breakfast at Be Our Guest in Magic Kingdom. If you haven’t eaten there before it’s a beautiful place with three different dining rooms that are impeccably decorated like the Beast’s castle. I had a delicious meal of quiche and pastries in a spectacular ballroom setting. The Magic Kingdom is my favorite Disney park so my parents and I spent a lot of time there after breakfast. As soon as we arrived that morning I made sure to get my birthday button so just about every Cast Member we encountered all day wished me a happy birthday. I also wore my Disney World Marathon shirt to the parks that day to advertise my accomplishment, but it was cold enough to warrant wearing a jacket over it most of the day. In the afternoon we caught a bus from the Magic Kingdom to Hollywood Studios where I had an early dinner reservation at Sci-Fi Dine-In Theater Restaurant. The opportunity to have a meal in a booth shaped like a car at a drive-in movie theater was too intriguing to pass up. And it was a lot of fun. The food wasn’t very impressive, but I loved watching the old sci-fi movie trailers, clips, and cartoons while eating. But by far the highlight of the evening was the Star Wars Galactic Spectacular Dessert Party. Rather than have a birthday dessert with dinner I made reservations for all three of us for the dessert party preceding the Star Wars fireworks, which also came with priority viewing for the show. The party was in the Star Wars Launch Bay and I ate more than my fair share of indulgent sweets to celebrate my birthday. It was great. I also got my picture taken with Chewbacca where I was able to show off my marathon medal. And then Star Wars Galactic Spectacular Fireworks were really incredible. For a nerd like me it was the best way to end a birthday.

January 10th was my last full day at Disney World, but it was a little less structured. After breakfast my parents and took the bus to Disney Springs and spent the morning doing a little shopping there. We ended up being pretty frugal, only buying some Disney t-shirts at Uniqlo. They turned out to be the perfect souvenirs from our trip, and much more affordable than anything from the parks too. Our only obligation for the day was dinner at Hollywood Brown Derby restaurant in Hollywood Studios. It turned out to be one of the best meals that we had the whole trip with salads, steak and duck entrees, and delicious desserts. It was a fixed-price meal that included priority seating for the Fantasmic show later in the evening. Fantasmic has been on hiatus at Disneyland for over a year now due to extensive construction so I haven’t seen it in a long time. And the viewing options are much better at Disney World anyway with stadium bleacher seating. I really enjoyed seeing the show again. As soon as we got out of Fantasmic I made a beeline for Tower of Terror in order to use the Fast Pass I’d reserved. At Disneyland Tower of Terror closed permanently on January 2nd (I wrote a whole post about the last time I went on it back in November) to be transformed into a “Guardians of the Galaxy” ride so I was excited to be able to still be able to experience the Disney World version. It’s a bit more elaborate than the one in Anaheim was so it was an enjoyable surprise.

I flew home to Los Angeles on January 11th, but my flight wasn’t until the evening so had a chance to spend a few more hours at a Disney park before departing. I decided to go back to the Magic Kingdom and get on some rides that I missed on my birthday. Like Space Mountain, the Peoplemover, Jungle Cruise, Haunted Mansion, and Country Bear Jamboree. I also bought a Disney World 45th anniversary shirt and pin. I realize that the 45th anniversary was technically in the fall of 2016, but Disneyland was decorated for its 60th anniversary for over a year and a half so I figure the Disney World celebratory items were still applicable. I was really sorry to be leaving Orlando after such a great trip, including completing my first marathon and my 38th birthday, but it was time to get back to reality. I have a few souvenirs, a bunch of pictures, and even more great memories. And luckily I’ll be back at Disney World for the Wine & Dine races in November!