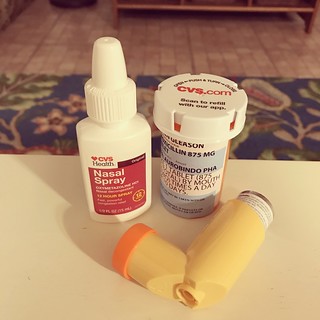 I know you guys are tired of reading about the ongoing saga of my current illness, and I’m pretty exasperated to still be writing about it. Believe me, I want nothing more than to be healthy again. To be able to go to work consistently again, and also to be able to exercise regularly again would be heavenly. But I woke up this morning just as sick as I have been for the last two weeks or so. My head was still congested, my cough was as bad as ever, and I felt exhausted in spite of getting plenty of rest. That’s when I realized that this isn’t just a cold anymore. After sleeping nearly all day I went to CVS Minute Clinic again to see if there was anything else I could do to hasten the healing. Turns out that my wheezing is indicative of bronchitis, and my congestion means I also have a sinus infection. Exciting! I got some antibiotics, an inhaler, and some nose spray to help with the symptoms. Hopefully with these medications I will start feeling better soon. I really can’t afford to miss any more work, and I have got to start running again if I don’t want to lose all of my endurance. (My foot has had more than enough time to heal too.) I know that in the grand scheme of things this illness is just a minor annoyance, but I’m ready to be over it already. Not only have I watched all of the shows on my DVR, but I also already binge watched the entire first season of “The Crown.” I’m tired of being cooped up at home! Here’s hoping I wake up significantly improved tomorrow morning.