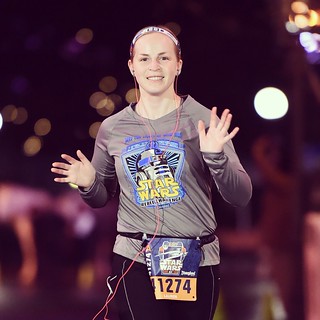 The Star Wars Light Side Half Marathon Weekend took place one week after my marathon at Disney World. As much as I wanted to participate in the Rebel Challenge (10K + half marathon) like I did year, I knew it probably wasn’t advisable after completing my first full marathon. And it’s a good thing I restrained myself during registration because I was in no shape to run more than a few miles that soon after the marathon due to my injury and illness. But Disneyland only has four race weekends a year, so rather than completely skipping this one I signed up for the Star Wars 5K so I could still enjoy the experience without exerting myself too much. Because I was only running 3.1 miles on a relatively chilly morning I decided to wear last year’s Rebel Challenge shirt even though it has long sleeves. Running shirts with long sleeves are basically useless in Southern California (I think I’ve written about this before), but I figured I wouldn’t overheat too much during such a short race. I also wore my R2-D2 headband to match the Rebel Challenge shirt because nerdy runners love stuff like that. I was in corral A for the 5K which is insane because I’m just not that fast, but I still loved it. Usually waiting for Disney races to start is tedious, but this time they showed the 1977, 1980, and 1983 movie trailers for the original Star Wars trilogy which was intriguing. There were scenes there that weren’t even included in the final versions of the movies. Pretty interesting. (Do yourself a favor and check out this Empire Strikes Back preview. If you’re sharp you’ll notice a seriously disturbing moment in there. Let me know if you discover it.) Since I was in corral A I got to start the race right at 5:30 AM. I was worried that my foot would hurt while I was running, requiring me to walk at least part of the way, but I was surprisingly pain free! My lungs were burning because I was getting sick, but I pushed myself to keep running to prove that I could do it. I even ran the entire 3.1 miles which is rare for me, even during a 5K. Disney 5Ks aren’t officially timed, but my Garmin watch told me I averaged 10:26 min/mile pace which was really good for my first run after the marathon. And it was a lot of fun too. After collecting my medal and taking some pictures I walked back to the parking structure and drove home to shower and get ready for work. The rest of the day was less entertaining because by the end of the work day I realized I was getting really sick. I was sneezing left and right in the afternoon so I knew an unproductive weekend of rest and recuperation was in my future. Unfortunately the cold deteriorated into the flu on Sunday…and I’m still suffering right now. The Star Wars 5K ended with a whimper, but I’m still glad I did it. I live for these races!