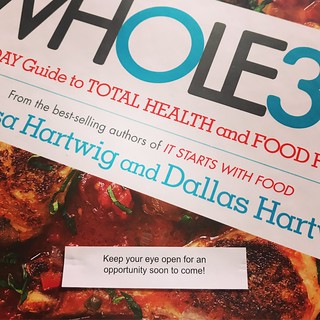 Wow, it’s been a long time since I updated my webpage! I basically haven’t posted anything since March which is crazy. I never even reported back on how the LA Marathon went! So much has happened in the last six months so I’ll have to try and write some recap posts soon. In the meantime, the reason I’m writing today is not to recount anything in the past, but to lay the groundwork for the near future. Tomorrow is October 1st which is the beginning of my favorite three months of the year. I can’t wait! And along with the arrival of the October it’s also the day that my friend Natalie and I decided that we’re going to start the Whole30 program. It makes sense because with the 30-day duration of the diet (which basically means no sugar, grains, dairy, or legumes for a month) we’ll be done the day before Halloween so we don’t have to feel guilty about indulging for the holiday. Actually, my big treat on October 31st will be at the annual chili cook-off at work, but it’s still an indulgence. Also, I leave on my trip to Orlando for the Wine & Dine Half Marathon Weekend on November 1st so I won’t have to worry about food restrictions then either. I definitely have some things to look forward to in the next few months, but until then I’m going to attempt the Whole30 diet. If I’m honest, it’s a little daunting trying to figure out what exactly I can eat for all of my meals and snacks while on the program. I’ve done a little planning, but not nearly as much as I should have. I guess I’ll have to take things one day at a time. Right now I have a fridge and freezer full of food (some Whole30-compliant, some not – more on that later) My goal is to update my webpage every day during this experiment to document my successes, my failures, and what I’ve learned from each of those categories. My schedule for the rest of the year is already packed, but I’ve really missed blogging. I’m hoping this 30-day challenge not only helps me develop healthier eating patterns (and breaks my ridiculous sugar addiction), but also gets me back in the habit of writing more often. We’ll see how it goes!