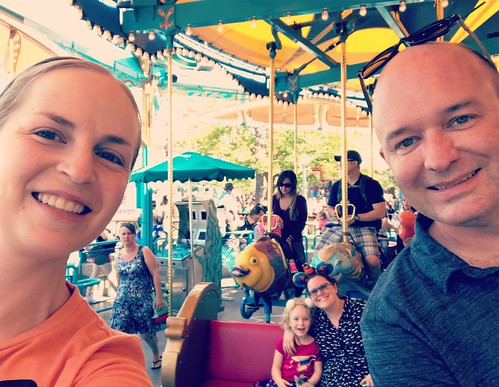 I love going to Disneyland with my goddaughter and her family. (If you look in the background of the above photo you’ll see her sitting with her mom on bench of the California Adventure carousel, while her dad and I crowded the foreground of the picture.) I met her mom in a Craigslist forum more than a decade ago and we both just happened to live in the greater Los Angeles area. We even got married on the same day (to other people, with varying degrees of success). Then three or four years ago we all met in person (at Disneyland, of course), and we’ve been close ever since. I love my goddaughter so much that my heart could burst. And knowing how being female means the scales are already stacked against her devastates me.

This week many, many women (and men as well) have been using the hashtag #metoo on social media to bring awareness to the widespread nature of sexual harassment and sexual assault. I don’t know a single woman who hasn’t had some negative experience in this arena. Some worse than others, but we are all affected at some point in our lives. I have been equally saddened by the massive outpouring of stories and awed by the bravery of the victim who shared their ordeals. Everyone needs to read these and think about how their daily interactions might affect others in an unintended way. Unfortunately I also read a shocking number of replies to these posts that either directly or indirectly blamed the victim for getting themselves into a compromising situation. Women are offered suggestions for how to avoid giving men the opportunity to harass us. Really? For example, a friend of mine mentioned how she was walking down the street and a man in a car drove past slowly and leered a her. Everyone would agree that this guy was a creep, right? But the feedback she got advised her to walk either with her husband or a dog in order to keep herself safe in her own neighborhood. No one said, “That guy is disgusting. He needs to leave women alone.” So men can behave that way without any consequence, but women need to avoid being alone to keep it from happening. Is that really what we want to teach our girls? As a single woman without a dog there is absolutely no reason that I should have to change either of those things in order to feel safe. Somehow women are the ones forced to shoulder the burden of avoiding situations where we might be in danger rather than stopping them with the perpetrator. You’ll have to excuse me if I don’t buy into that misogynistic notion.

This is not the world I want my goddaughter to grow up in. Of course I’m realistic and I’ll tell her to be careful and think of her own safety first (that’s just practical), but I’m also going to fight to make things better for her in any way I can. I was definitely affected by all of the women and men who shared their #metoo stories this week, and I hope it opened the eyes of others as well.