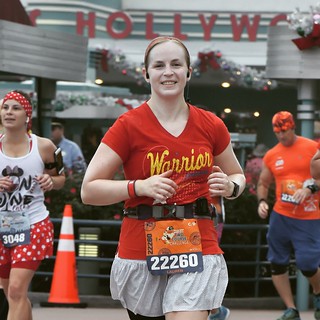 On Sunday morning my alarm didn’t go off at 3 AM like the two previous days, but at 2:45 AM instead! I figured I needed an extra 15 minutes to apply all of the necessary sunscreen before catching the bus to the start line. Daylight saving time ended shortly before I woke up, rolling the clocks back one hour, so the sun would be rising earlier as far as the clock was concerned. I’d definitely be running part of the half marathon in the sunlight and I had to be prepared. The upside of DST ending was that I fell asleep at 8:30 PM the night before, which was equivalent to 7:30 PM, so I got 7 full hours of sleep! That’s hard for me to do when my schedule is so out of whack on vacation. I picked my Wonder Woman shirt and white sparkle skirt to wear for 13.1 miles. The last time I wore those items was for the Long Beach marathon a few weeks earlier and it was such a miserable experience that I wanted to have a more positive memory associated with that outfit. Spoiler alert – it worked! It was very humid on Sunday morning so I was sweating like a pig, but the temperature was as low as I could have hoped for central Florida in November. Similar to the 10K, the half marathon started in the Magic Kingdom parking lot and went south, so the first three plus miles were on boring access roads. But after that we ran through Animal Kingdom, and this time I got to see the new Pandora area in the daylight. It’s absolutely amazing! After leaving Animal Kingdom we had another few boring miles before getting to Hollywood Studios, but that was quickly followed by the Boardwalk resort hotel area and Epcot. I actually enjoyed the last 5K of this half marathon, which is usually the hardest part of the race for me, due to the clustered entertainment along those miles. It was a lot of fun. My time wasn’t amazing, but it was better than I initially expected after my slower than average summer and fall running so I was happy. I was even happier to pick up my half marathon and Two Course Challenge (10K + half marathon) medals after crossing the finish line. Afterwards I hopped on the bus back to my hotel so I could shower, scarf down some Mickey waffles for breakfast, and take a nap! I needed some rest before going to Animal Kingdom later that afternoon for an amazing dinner at Tiffins (pea fritters, venison tenderloin, and sorbet) – seriously, everyone needs to eat there – and the Rivers of Light evening show. I skipped the Wine & Dine post-race party at Epcot that night because it didn’t start until 10 PM and I was dead tired much earlier than that. Repacking my suitcase to fly home the next day and getting a good night’s sleep were more important. than staying up late for the party!