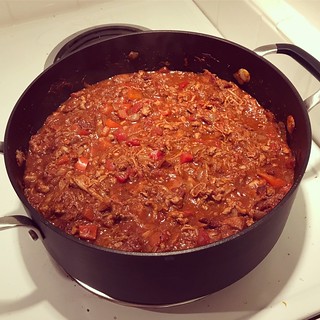 Halloween is always a busy holiday, but this year it was even crazier than usual. Not only did I have the annual chili cook-off at work, but was I leaving to go on vacation the next morning. I didn’t have a free minute all day. I got to work really early that morning to start warming up my chili which had been in my fridge since I cooked it a couple of days before. In addition to my own I was in charge of heating up a co-worker’s chili as well because he was out of town, but still wanted to be in the competition. I also wanted to be able to get some actual work done before the duties of the chili cook-off coordinator got too overwhelming. My chili this year was called Three Little Piggies chili, as named by my friend Anjanette, because it contained pork in three forms – bacon (maple bacon, even, which made it Whole30 non-compliant), ground pork, and carnitas. I didn’t get a chance to taste it until just before the chili cook-off judges started their deliberations, but I thought it was delicious. And thanks to my Whole30(-ish) experience ending the day before, I took advantage of no food restrictions and ate a lot of chips between breakfast and lunch.

The chili judges I recruited (actually, two of then volunteered for the job a year ago!) made their rounds at 11 AM and used a very systematic, math-based method to choose their favorites. Then at 11:30 AM I opened up the buffet of 15 chili entries and all of the other food that people brought to the general public for lunch. The chili cook-off seems to grow in size every year so I was running around like crazy making sure that everything was going smoothly. I got in line for food pretty late and most of the Crockpots had already been practically licked clean, including mine. I still got to try a couple of chilis that weren’t too spicy and they were both delicious. I also sampled a piece of the pumpkin sheet cake that I made and it was scrumptious. The white glaze on the pumpkin cake worked out really well. I will remember that for next time, but I’ll make sure to get some higher quality sprinkles! After everyone had eaten and voted for their favorite chili I announced the winners of the popular vote as well as the judge’s vote. Surprisingly, my chili managed to bring in 2nd place on the judge’s list! It just goes to show that adding bacon to a dish makes it infinitely more popular. I also tied with two others for 3rd place in the popular vote. Not bad for a mild chili since the top prizes usually go to the spicy entries.

I wanted to go home at 5 PM in order to watch Game 6 of the World Series to see if the Dodgers could win and keep their season alive, but my workload had other ideas. I ended up staying until 7 PM while periodically checking in on the baseball game on ESPN GameCast. By the time I got home and turned on the TV to finish watching the game I knew there was no way I’d have time to go for a run that night. It was already late and I still had a lot to do. First of all, I washed all of the dishes from the chili cook-off as well as everything left over from making the pumpkin sheet cake the night before. That was a lot of work, but I didn’t want to leave them sitting in my sink for a week! And then I had to pack my suitcase for my trip to Orlando. I hadn’t done a very good job preparing for my vacation ahead of time so I had my work cut out for me, but at least all of the clothes I needed to take with me were clean. The Dodgers did manage to win the baseball game and force a World Series Game 7 so that was good, but I didn’t get to bed until bed around midnight. Phew! It was quite a Halloween this year!