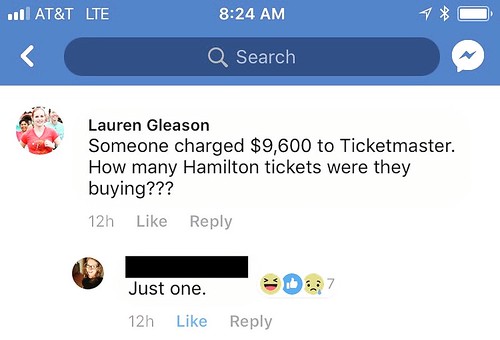 The day before I left for Orlando I got an email from my credit card company stating that there had been some unusual activity on my account. The email encouraged me to give them a call. Now let’s remember that this was Halloween so I was not only incredibly busy with the chili cook-off at work, but also trying to get some actual work done before my vacation, so I didn’t have a lot of time to make phone calls. Plus, I initially thought the email was a scam so there was no way I was going to call the number provided without doing some research. When I had a free minute I logged on to my credit card account to see if I could recognize anything strange. It took about 5 seconds for me to realize that the “scam” in this situation was not the email, but the recent $9600 charge on my card! Apparently, someone had gotten a hold of my number and tried to charge $9600 to Ticketmaster. Holy cow! I am grateful to the credit card company for identifying that this was out of character for my account and flagging it immediately. The downside was that my card had to be cancelled the day before I went to Orlando. Not the most convenient scenario, but I got along just fine with only my debit card while I was gone. I just wasn’t earning Hilton Honors points on all of my Disney World purchases. The horror! When I shared this story in one of my Facebook groups a good friend made a hilarious joke (see the photo above) that still makes me laugh two weeks later. I sympathize with any thief who was so desperate to get a ticket for “Hamilton” that he or she needed a stolen credit card number. I just wish it wasn’t mine!