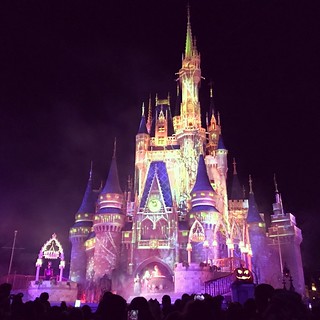 On November 1st I flew to Orlando for my Wine & Dine Half Marathon Weekend adventure, but back in August a surprising opportunity presented itself. I was looking at the Disney World website and realized that the very last Mickey’s Not-So-Scary Halloween party of the season was being held at the Magic Kingdom the day I arrived. I was willing to move heaven and earth to be able to attend, but would it be enough? The party was starting at 7 PM which was the same time my flight was scheduled to land. However, the celebration lasted until midnight so even if I got there a couple of hours late I would still have plenty of time to enjoy the festivities. There was hope! So I optimistically purchased a Halloween party ticket and prepared myself as much as possible for my busy November 1st schedule. First of all, I tagged my suitcase so that Mickey’s Magical Express bus service would pick it up from baggage claim rather than waiting for it myself. That saved me a little time. Second, I checked in to my hotel online so I could skip the front desk. And third, I slept quite a bit on the plane so I could more easily stay up late and savor every minute of the Halloween party.

I ended up walking through the Magic Kingdom gates a little after 9 PM. As much as I love Disney World, the main reason I wanted to go to Mickey’s Not-So-Scary Halloween party was to see the seasonal fireworks, parade, and Hocus Pocus live show. Before picking a spot to watch the HalloWishes Fireworks I did a little trick or treating. There were several spots around the park where cast members dole out handfuls of candy so it didn’t take long for my little bag to be completely full. It took me the rest of my trip to finish all of it! I grabbed a salad for dinner to counteract the sugar rush, and then I made my way back to Cinderella’s Castle for the fireworks t 10:15 PM. Disney World sure knows how to put on a show. As a Disneyland native I wasn’t expecting the fireworks to come from so many different locations! It was really amazing. Next everyone crowded around the castle for the Hocus Pocus Villain Spectacular at 10:45 PM. This show was worth the (relatively high) price of admission. The actresses were great, there were a lot of laughs, and the music gave me goosebumps, especially “I Put A Spell On You.” It was incredible There were a lot of reasons that going to the Halloween party was impractical for me, but when I saw the Hocus Pocus show I knew I had made the right decision. Take a look at a short video I took of the finale to see what I mean. The last Boo-to-You Halloween Parade of the night took place at 11:15 PM so I hung around the castle for that after Hocus Pocus was over. It was the perfect way to say goodbye to the Halloween season. Before leaving Magic Kingdom I walked around the park some more (and I’ll confess to gathering some more candy) to drink it all in. I finally got on the bus back to my hotel around 12:30 AM very happy with my decision to go to the Halloween party and make my November 1st as insane as possible. I wouldn’t have had it any other way.