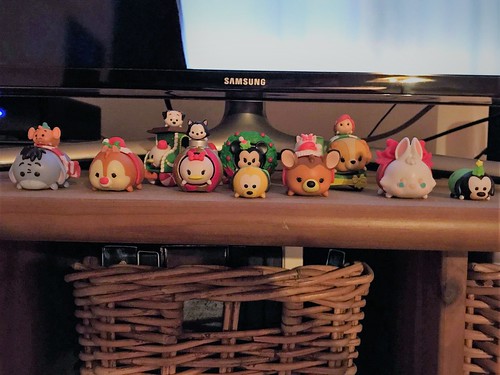 As I’ve previously described, on New Year’s Day I was sick with the flu. It was miserable. After my official diagnosis I spent most of the day on the computer, cancelling my highly anticipated Disney World vacation and feeling sorry for myself. An overabundance of time on the internet combined with my despair over the state of my health was arguably the catalyst for my glut of retail therapy. (Admittedly, some of it did happen in December, but I blame those particular purchases on the holidays.) At least it’s given me plenty to write about recently!

Speaking of the holidays, when we were growing up my brother and I had Advent calendars that had a piece of chocolate for December 1st through 24th. It was magical, given the fact that we were rarely allowed such treats. Now that I’m an adult and can buy chocolate whenever I want (much to the despair of my bathroom scale), a calendar full of sweets has lost its charm. But then last fall I was delighted to discover that Disney makes Tsum Tsum Advent calendars so I immediately bought one for myself! This is what adults do, right? The above photo includes all the characters I unboxed in December 2017. It was fantastic. On January 1st as I was browsing Amazon, feeling like crap and mourning the end of the holiday season, I saw something extraordinary – a MARVEL Tsum Tsum Advent calendar! My mind was blown. Of course I ordered one for 2018. Presents for yourself are the best kind. And let’s face it, most of these retail therapy purchases I’ve made lately are presents to myself. Granted, some of them are practical or utilitarian, like dress pants for work or household supplies, but a majority of them have been purely for amusement. Unlike all of the other items, this particular acquisition will have delayed gratification. The Advent calendar is something I’ll have to look forward to as end of the year approaches. Maybe I’ll even trim my Christmas tree this year. A girl can dream!