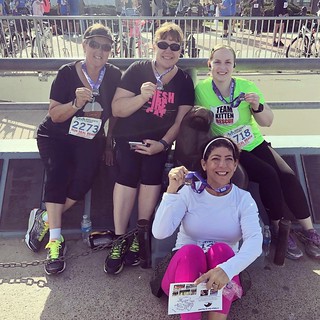 You don’t know how happy I was to run the Seal Beach 5K on March 24th. Not because it’s my beloved hometown race or because I can basically roll out of bed and walk to the start line, but because I had to defy the odds to get there this year. I was on a business trip to two different cities during the week, and I booked my flight home on Friday evening so that I would be back in time to run the race on Saturday morning. It wasn’t ideal with my plane landing in Orange County at 10 PM, but I was committed. However, things didn’t exactly go as planned.

On Monday my flight from Orange County to New York (with a layover in Atlanta) was blessedly uneventful. It was so cold in New York, though. Luckily there was no snowfall while I was there and I didn’t have to deal with much ice due to covered parking at my hotel. That leg of my trip was very successful. Then it came time for me to fly to DC on Wednesday evening. Of course that was the day Winter Storm Toby was terrorizing the eastern seaboard so it seemed very likely that my travel plans would have to change. But as the day progressed Delta never modified my itinerary or downgraded the status of my flights so I headed to the airport as planned. My co-workers who were on direct flights that afternoon had to reschedule their travel for the next day. However, since I had a completely out-of-the-way layover in Detroit first, I somehow made it to Dulles without any trouble because my flight landed around 9 PM. By then the snow had stopped and the roads were perfectly clear when driving to my hotel. It really couldn’t have been any easier. I thought the worst was over, but I was so wrong.

On Friday evening I headed to Dulles to fly back home, with a layover in Minneapolis first. My flight from DC took off late due to “air traffic” (Delta’s explanation) which caused me to miss my connection to Orange County. When the plane landed in Minneapolis I ran to attempt to make the connection, but when I arrived, out of breath and fairly sweaty, the jetway doors had already closed. I was out of luck and so annoyed. Delta had already rebooked me on another flight the following morning so things were looking bad, but I hadn’t quite given up hope of getting home that night. My final opportunity was a flight to LAX that was leaving a few hours later. Of course it was overbooked, but an airline employee put me close to the top of the standby list. Miraculously I got the last seat on the flight so I was headed home! It landed at LAX at midnight. Remember that I was originally supposed to fly to Orange County? This meant that my car was 40 miles away. I took a very expensive taxi ride from one airport to another, picked up my car, and drove an additional 30 minutes to get home at 2 AM. At that point I had been awake for about 20 hours and I was exhausted. I fell asleep around 2:30 AM with my alarm set for 7 AM in order to give myself a bare minimum amount of time to get ready for the Seal Beach 5K in the morning. So everything worked out and I got to run the race, but I never expected it would be such an ordeal!