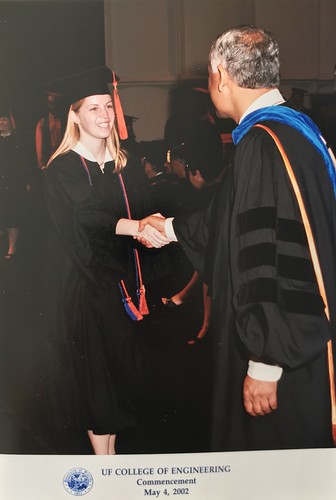 When I was growing up my parents always told me that I could do anything I wanted to with my life. In fact, I wholeheartedly believed that women were smarter than men. I’m not sure where I got that idea, but I defended it to my male friends on more than one occasion. Also, I was encouraged by my teachers to pursue the subjects I enjoyed and excelled in – specifically, math and science. In spite of the fact that these subjects have always been traditionally dominated by men, none of my elementary school teachers (all women) ever gave me any indication that I didn’t have the ability to follow my dream of becoming an engineer. I had nothing but cheerleaders in my family and in the academic arena throughout my young life. This gave me the confidence I needed to pursue my chosen career as an aerospace engineer. I never once doubted that I had the competence and intelligence to fulfill this ambition. Unfortunately society compels females to hide their intelligence in order to gain the favor of the opposite sex. We are systematically taught that boys don’t like girls who are smarter than they are. Lucky for me I never bought into that ridiculousness. Throughout my childhood and adolescence I was always a little odd, and by the time I was about fifteen I finally stopped trying to fit into society’s mold. It was so liberating! So how did everything ultimately turn out? Well, In December I will celebrate 15 years of employment at Boeing as a spacecraft systems engineer, so I’d call that a success!

A while back I discovered a website maintained by a self-proclaimed fundamentalist Christian woman who basically believes the opposite of the way I do on just about everything. For some reason, in spite of her hypocritical writings and harsh judgements on anyone who disagrees with her, I keep typing in her URL every day to see what fresh nonsense she has posted. This probably isn’t the smartest thing to do if you are trying to keep your mental health stable or your blood pressure low, but I’ve discovered that it’s like watching an internet train wreck. I just can’t look away! On 6/24, upon reading something this lady posted to her Instagram account about women’s career limitations I got extremely irritated and I was compelled to leave a comment. She claimed that, “One of the stupidest things mothers can say to their daughters: ‘You can be anything you want to be!’ This comes from a feminist mindset and is a lie.” Excuse me??? Besides the fact that in the 21st century girls thankfully have almost as many options as boys (thank you, feminists!), but I imagine having your parent discourage you at a young age would severely cripple your self-confidence. And females already have enough hurdles placed in front of us simply due to our gender. How about you don’t limit your daughter’s possibilities before you even know what she’s capable of? Trust you have loved her and raised her well enough that she can make choices based on her interests and abilities that will lead her in the right direction as she grows up.

Later in her post this “Christian” woman asked, “How about teaching your daughters that they should seek to be what God calls them to be instead?” She can’t even fathom that God would call a woman to a career that requires a higher education, like a doctor, a lawyer, or (heaven forbid) an aerospace engineer. At this point I had already been banned from commenting on her Facebook wall (a funny, yet disturbing story for another post), but I hadn’t yet used my “get out of jail free” card on her Instagram. Here is how I chose to play it – “Believe it or not, I am a rocket scientist. Luckily my parents did tell me I could be anything I wanted. Women shouldn’t be limited!” Even though I got a couple of replies (which lacked significant substance), it wasn’t long before my comment was deleted and I was banned from viewing her account. So because I disagreed with this “Godly” woman (her God is most certainly not my God) I was removed from the conversation. That’s one way to avoid having to back up your claims! Fortunately I am a modern woman with an established career, money in the bank, and a pretty comfortable life (except for the ex-husband who is thankfully in my past) who cares very little what other people think of me. Especially not crazy internet strangers. So I’ll go back to happily living my life, constantly rejecting limitations placed on me because I’m a female. Nothing is going to hold me back!