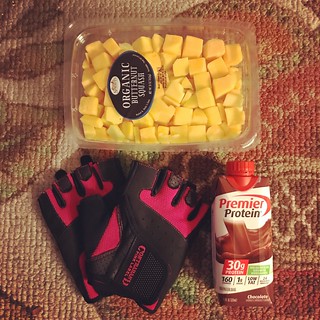 That first week of the 6-week fat loss challenge I was 100% faithful to my plan and didn’t give in to even a single craving. (Except for my one allotted cheat meal, a turkey sub from Jersey Mike’s that I ate on Friday night as fuel for my Saturday morning 8-mile run.) I had almost no sugar at all, except for whatever amount that’s in my favorite salad dressing from the Greek restaurant that’s two blocks from my house. Their gyro salad is divine. This was undeniably a honeymoon period because the second week on the program I started to lose my resolve. I had some slip-ups in moments of weakness. My very first cheat was a pistachio-flavored Oreo Thin at work. Honestly, it wasn’t worth it. It was so overwhelmingly sweet that I didn’t enjoy it at all. It tasted like a mouthful of sugar and nothing else. At least I wasn’t tempted to have another one! The next day my diet transgression was a bit bigger. I was working late for a big event and we had dinner catered from Boudin Bakery. I had brought in food from home so I wasn’t tempted by the sandwiches, the tomato soup, or the underwhelming salad. However, when I made the mistake of glancing at the dessert tray I saw an iced shortbread cookie that was calling my name. It only took a split second for me to decide that I was absolutely going to eat it. And it was so perfect and delicious that I regret nothing. So by the time the end of the work week rolled around I had only had those two minor deviations, but then the weekend arrived and it didn’t go quite as smoothly.

Comfort eating is a hard habit to curb when it’s been such a regular coping mechanism for so long. I was feeling hormonal over the weekend and not in the right frame of mind to make good choices. I decided to have my weekly cheat meal on Saturday night so I drove a half hour to Firehouse Subs and got my favorite sandwich. It’s always worth the extra time on the freeway. I enjoyed every bite of that Hook & Ladder sub (turkey and ham), but it wasn’t quite enough to curb my irrational cravings for junk food. On Friday afternoon at work someone left a bag of caramel M&M’s out and I foolishly tried a couple of them. Unfortunately they were delicious. I should have known better and avoided them altogether, but I just wasn’t thinking straight. So Saturday night, when I was slightly delirious and willing to do anything to get some sugar, I bought caramel M&M’s at Target. As it usually goes, I felt so happy and satisfied while eating the M&M’s, but I regretted my actions as soon as I was finished. I didn’t even make it through the whole bag before the guilt set in. I was mad at myself for being weak, especially since I felt like I’d been making progress already on this diet program. I vowed to do better on Sunday, but it ended up being another day of poor choices too. At the end of the weekend I was feeling pretty terrible, but I had to remind myself that a few slip-ups are not enough to undo two weeks of hard work. I have to remember to stop chastising myself because I’m an imperfect human with ups and downs just like everybody else. In the long-term these healthy changes I’ve been making will pay off!