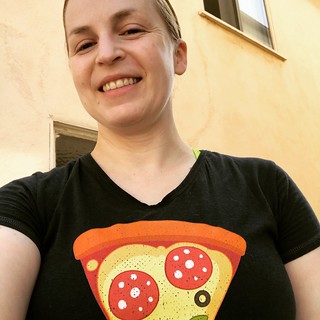 Week 3 of this 6-week fat loss program has been rough. Due to work stress and crazy hormones I’ve been fighting a multitude of cravings, and losing those battles more often than I’d like to admit. This past week I’ve somehow justified impulsively purchasing a lot of unhealthy snack foods and then chowing down on them until the guilt finally sets in. It’s vicious cycle of self-indulgence and self-hate that I have to break or else I’ll be right back where I started a few weeks ago. (Not that it would be the worst thing to happen, but I’d rather not backslide if I can avoid it.) You’d think feeling crappy about myself would be motivation enough to stay away from junk food, but I guess not. Last Sunday I unwisely got on the scale (because my weight should not be my primary indication of success), but I surprisingly discovered that I had lost seven pounds! That was extremely encouraging, but it didn’t keep me from making poor choices. I’m pretty upset with myself, but I know there’s nothing I can do to change the past. All I can do right now is remember how good progress feels and focus on all of my short-term and long-term goals.

My first goal when I started this program was to be able to wear an older dress for a big meeting at work. For the first six months of 2018 I’ve mostly been wearing a single dress when I have to give presentations and people are probably starting to wonder whether it’s the only one I own. My professional wardrobe needs more variety, even if that only means I can wear some of my old dresses rather than buying a bunch of new ones. I only had 16 days to slim down enough to squeeze into a dress that was way too tight beforehand so I had no idea if it was even possible. I usually wear some high-waisted Spanx under my work dresses to help even everything out, but they are horribly binding and have a tendency to roll down throughout the day. I’m always pulling on them to keep them in place and that’s not something you want to be doing in front of your co-workers. So the week before the meeting I went to Target to look for alternatives. I settled on a waist cincher with plastic boning that will circumvent the pesky rolling down while smoothing out the lumps and bumps around my waist. I was skeptical that it was going to be the right solution, but I actually loved it! Unfortunately the dress I was hoping to wear for my presentation last Tuesday ended up still being slightly too small, but I was able to comfortably wear another old dress so I was still pleased. I had made enough progress in 16 days to fit into an old dress and I had found a foundation garment that made it look fantastic on my body in its current state. The waist cincher has its downsides, namely the boning sometimes poking me when I sit down, but overall I’m optimistic about its prospects for future work meetings where I need to dress up.

My next big goal is to wear something fabulous to a wedding reception in Portland, OR in less than four weeks. The reception is for a couple of friends who got married last year in a small ceremony, but are now throwing a big party for all of their family and friends. I’m really looking forward to it. I’ve never been to Oregon before and going to this reception in Portland is a wonderful reason to visit for the first time. Also, I’m going to see a lot of my online friends (I wrote about them for the first time back in 2015) who are scattered all over the country. We love any excuse to be able to get together! We’ll see what dresses I can fit into before I head to Portland for the celebration.