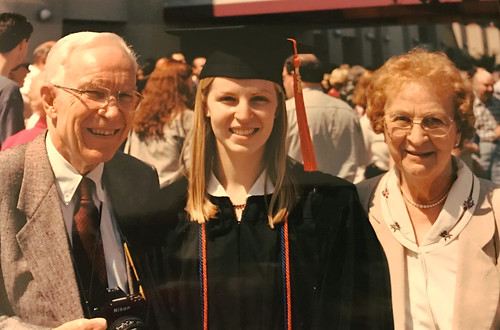 Yesterday I wrote a post about the financial aspects of my undergraduate and graduate school education. I was attempting to refute claims from my least favorite blogger that men find women less desirable as potential wives if they have debt incurred from higher education. To take it even further, this woman doesn’t approve of college at all for those of us of the female persuasion. To use her own words, “There’s nothing biblical about young women going away to college.” It’s easy to unravel this argument, though. First of all, college as we know it today did not exist millennia ago when the Bible was written. Of course there were institutes of higher learning, especially in the more wealthy and powerful nations, but I don’t think even those are addressed in the Bible. (Please correct me if I’m wrong!) Second, women had almost no rights or autonomy at that time so I’m sure they received little to no education. They had so few options in their lives simply because of their gender and the male-dominated society they were born into. (This is slightly off topic, but as always, I am unbelievably grateful to all of the women who came before me and made the world a more equitable place for future generations.) Later in her post this blogger continues her rant:

To start with, what individual could possibly have the right to determine what God’s ordained role for any person other than themselves? That’s arrogance of the highest order. There are a number of reasons that women want to further their education, but most want to prepare for a career. I was in a sorority at UF and a majority of my sisters had lofty professional dreams that they were pursing, similar to my own. In this day and age a college degree is almost a requirement for any line of work. Of course, I understand that this isn’t universally true, and that college isn’t right for everyone. And that’s perfectly OK! I don’t judge folks for their educational choices, unlike some “Christian” bloggers I know. (I read another article by a different author recently that got me all fired up on this subject, but I’ll have to address that at a later time.) On the other hand, most of my sorority sisters were also eager to fall in love, get married, and start having children. So even though they had ambitions outside the home, they still wanted the traditional house with a white picket fence and a loving family to go with it. We are lucky that thanks to women’s rights advocates and feminists that there’s no reason we can’t have both! For example, where would we be without female-dominated professions like nursing, teaching, and social work? Let me use another quote straight from my least favorite blogger herself. In a recent Instagram post she asked, “Many women believe they are being ‘called’ to their careers but are they really?” For myself the answer is a resounding YES! And I’m sure most of the working women that I know, many with husbands and children too, would have a similar response.

The last point I want to address is single women such as myself. How would I be able to support myself if I didn’t have a good job thanks to my college education? Granted, my situation is unique since I made the choice to be single rather than having singleness thrust upon me. I divorced my ex-husband because he was abusive and cheated on me, but not all women have that luxury. What about women who are widowed or whose husbands leave them? Also, what about married women whose husbands become disabled or unable to work? How do they feed their children, keep a roof over their head, and satisfy their most basic needs? As I mentioned earlier, it’s difficult to get a good job without a college degree now. This is the reason I believe that all women who are inclined to go to college should do so, even if they plan to be a stay-at home wife and mother, just in case they are required to be their family’s breadwinner for one reason or another. It seems prudent to plan for whatever the future could bring rather than relying on a man to fulfill the provider role for the rest of your life. Of course this is just my opinion and I would encourage all women, couples, and families to figure out what works best for them. God gave us free will for a reason and he wanted all of his children to be happy, including members of the fairer sex!

P.S. In case you were wondering, one of the reasons I continue reading posts from this particular blogger is because they inspire me to think critically about the subject at hand and write these responses/rebuttals. Blogging has always been good for my soul. So even if I get angry reading her posts about how ladies these days are apparently loud, improper, and far too independent, I won’t let it affect how I feel about myself as a woman. I will simply use my visceral reaction as an opportunity to explain how not everyone fits into the same rigid box. Use your God-given gifts and live your life in whatever way you wish, ladies!