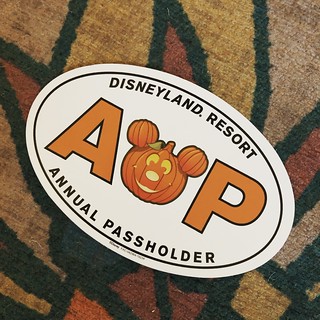 When I went back to work on January 2nd I was excited to get back to my routine, but I was also a little bit nervous. I wasn’t sure how my body was going to handle the increased activity, even just working part-time. Fortunately my four hours went smoothly that day (I even remembered my computer password) and I left that afternoon feeling pretty good. On my way home I had to swing by the pharmacy to pick up some prescriptions (I take so many now). As walked out of CVS I noticed that something was awry. Two of the magnets on the back of my car were missing. I stood there in shock for a minute because I had a hard time wrapping my brain around the situation. Someone had swiped my Disney Premier AP magnet, and also my special Halloween edition Disneyland AP magnet (see above photo). This was extremely upsetting. I wasn’t 100% sure if the theft happened while I was working or the during the few minutes I spent inside the pharmacy, but I find it unlikely that anyone at work was to blame. The most likely scenario is that the time my car was in the CVS parking lot allowed a thief to brazenly remove two magnets off my car. Luckily they didn’t want my Florida Gator magnet so that one remained in place. Small mercies. Fortunately I had a replacement for the Premier AP magnet at home , but I went through a lot of trouble to get that Halloween magnet in the fall!

I never got around to blogging about it (not yet, at least), but I went to the Disneyland Halloween Party with my BFF and her family on September 29th. Needless to say, we had an amazing time. The party was moved to California Adventure park in 2019 so a lot of things were different, but we still really enjoyed ourselves. The location change meant that I wasn’t able to hit the location inside Disneyland park where the limited edition Halloween AP magnets were being distributed. Luckily we had already planned to spend the night in Anaheim after the party (a Friday night) and go to Disneyland the next morning. My energy level was particularly low that Saturday, and I was pretty much ready for a nap after three hours at the park, but I was determined to get a magnet. From what I saw online it was a hot commodity amongst annual passholders. Shortly before I went home I swung by the Star Wars Launch Bay, stood in line, and acquired my very own Halloween AP magnet. Success! Since I’ve had that magnet proudly displayed on the back of my car. Well, until January 2nd, at least. I’m glad I have photographic evidence that I owned one of those babies, if only briefly. Not a huge deal in the grand scheme of things, but still mildly infuriating. I’m sure I could get another magnet one on eBay, but I don’t want to spend money on something so insignificant right now.

Funny enough, when I got home the evening of the magnet theft I wrote a Facebook post about the incident, and several of my local friends commented that this had happened to them as well. I had no idea there was such a rash of Disneyland AP magnet thefts in Southern California. I guess it is a ridiculously easy thing to steal, but I’m not quite sure why. False prestige? Anyway, I’ll be on the lookout for something new to replace the Halloween magnet this year. Or maybe I should just put it on my fridge instead? At least it would be safe there!