I love technology. How else could I have written and published a blog post while on an airplane today? I also found some potential Thanksgiving vegetable recipes and emailed them to my mom, as well as chatted with some friends on Facebook Messenger. It’s truly amazing. I’m anxiously awaiting the day when inflight wifi has enough bandwidth to stream Netflix and Amazon Prime content. That will make traveling infinitely more entertaining. Speaking of Amazon Prime, I am hoping to have a chance to watch the first episode of “The Grand Tour,” the new motoring show with Jeremy Clarkson, Richard Hammond, and James May, while I’m in Tallahassee. I’ve been looking forward to it for months.

In a similar vein, Run Disney published the registration dates for all of their late 2017 through early 2018 races this morning and everyone is a bit baffled. Usually registration for these races opens around seven or eight months before the race date. And you usually have to sign up immediately since you never know how quickly a race will sell out. (It varies from within 30 minutes to never, and it’s impossible to predict.) However, it looks like the lead time for upcoming Run Disney races has increased to nine or ten months now. In fact, my friends and I have to register for the Disneyland Half Marathon Weekend in about two weeks! So much for waiting to recoup some of my holiday spending before giving hundreds of dollars to the Disney Corporation.

Speaking of giving money to Disney (one of my favorite pastimes), the other day I got wind of an email that had supposedly been sent to all of the 2016 Avengers Half Marathon Weekend participants inviting them to pre-register for next year at a discount. This is unheard of for Run Disney! My biggest gripe is that even as an incredibly loyal participant who ran all three Avengers races in 2016 I didn’t receive this fabled email! With a desire to maintain my legacy status for the fourth year I would most definitely jump at the chance to sign up for 2017 now before the official registration begins. But for some reason I was left off that particular mailing list. I was so disappointed! Luckily one of the members of my Galloway running group was kind enough to share the link with me today so I should be able to pre-register after all. Thank goodness for understanding runner friends!

I have now finished watching the first episode of “The Grand Tour” and it was amazing! I was only able to watch the first half of it while I was in Florida because I had to get my parent’s TV to connect to Amazon Prime first. This required ordering a Roku streaming stick which only arrived on Saturday afternoon. Also, I did successfully sign up for the 2017 Avengers Half Marathon Weekend last Tuesday so that’s one Disney race registration that I have out of the way. The Disneyland Half Marathon Weekend registration is coming up next Thursday so I’m going to have one hefty credit card bill coming in December! 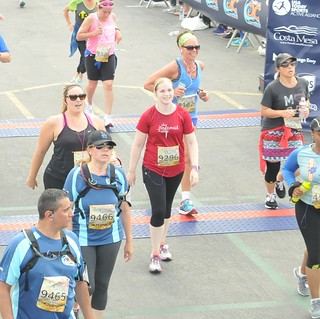 I’m on a plane to Miami right now where I’ll catch my flight to Tallahassee this afternoon. I paid for extra leg room this time around (worth it for nearly five hours between LA and Miami) so using my laptop is a breeze! Also, there’s an empty seat next to me so I don’t feel like anyone is looking at my screen while I type. I figured I’d take this time to finally write a post about a races from earlier this year that changed the way I run. It was a big deal!

In May of 2015 I was registered for the Orange County half marathon, but ended up skipping it because I was still recovering from my knee injury earlier in the year. Of course I managed to get hurt again in early 2016, but much to my delight I was healthy enough to run the OC half marathon this year. However, I was pretty out of shape when the race rolled around in May. So in order to keep from being completely bored on the course for three hours I decided to run with one of my co-workers and her sister-in-law. They had modest expectations for their finish time so I figured I wouldn’t be holding them back. This was my first introduction to the Galloway Run/Walk/Run Method. Previously I only took short walk breaks about every mile, but that particular strategy broke down after the first seven or eight miles when I couldn’t run a full mile at a time anymore. That made the rest of the race pretty frustrating. But using the Galloway Method during the OC half marathon the other ladies and I ran for 1 min 15 sec and then walked for 40 seconds, repeating those intervals for the whole 13.1 miles. (Mostly. There were a couple of monster hills that we broke down and walked all the way to the top!) This approach to running was completely new to me and it took a while to get used to. Taking a walk break after only running a little over a minute felt really strange at the beginning of the race, but as the miles passed I was amazed at how well the Galloway Method was working for me. I didn’t hit the wall at mile 10 like I usually did during a half marathon, and after we crossed the finish line I actually still had some energy left which, for me, is unheard of. It was a remarkable outcome. My finish time wasn’t anything to be proud of, but I didn’t care. After that day I was resolved to buy an internal timer and join my co-worker’s Galloway running group. I loved it that much! It’s been over five months since then and now I use the run/walk/run method exclusively for my races and other long runs. Like my highly successful 16 mile run last Saturday. I know the Galloway method isn’t right for everyone, but it has worked wonders for me so I’m glad I got the opportunity to try it during the OC half marathon. The course was really beautiful too so I’m looking forward to running it again in 2017.

As a side note, there was one particularly funny moment before the race even started. After getting on the bus from the fairgrounds parking lot to the start line I realized that I hadn’t put any sunscreen on my legs! I slathered it on my arms in the parking lot, but I had completely neglected my legs below the hem of my running capris. So once I got to the start line I started searching through the crowd, looking for someone who might have sunscreen in their bag of supplies that I could borrow. I probably looked creepy, but I was desperate! It took a while, but I finally found someone who had a bottle of sunscreen out and was willing to let me use some. Bless that kind stranger! I would have had lobster legs otherwise!