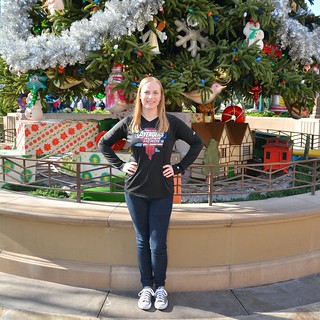 Welcome to 2017! I can’t believe it’s January 1st already. Once they finally arrive the holidays always seem to pass so quickly, and now I only have one more day left before I have to go back to work. Yikes! That’s why it was so important for me to start 2017 right. I decided to stay home from the New Year’s Eve party last night due to a stomach ache, so I watched the ball drop in New York on CNN at 9 PM and then got ready for bed. I was asleep, wearing earplugs to avoid being awoken at midnight, by 10 PM. It was pretty glorious. After spending a lovely New Year’s Day at Disneyland last year I knew I wanted to do that again today, so I got up early and drove to Anaheim. It was an appropriately chilly morning at Disneyland – the perfect way to ring in the new year. I’m going to savor sweatshirt weather at the parks for as long as possible because I know the warm weather will be here sooner than I’d like. In order to keep my daily calories in check I avoided the warming effects of the delicious Ghirardelli hot chocolate, though. I’m trying to start the new year healthy (although I ate quite a few peanut butter blondies this afternoon which didn’t help). Walking around Disneyland for three hours helped with that, luckily. I rode a few rides, bought a couple of pins, and basically enjoyed being there for the last time during the holiday season. I’m leaving for Orlando on Friday so I won’t be back to Disneyland until the middle of the month. I’m running the Star Wars Light Side 5K on Friday, January 13th (spooky!) so I’m looking forward to that. Speaking of which, I went for a 5-mile run tonight. I didn’t have a workout planned today, but after signing up for the Run the Year 2017 challenge yesterday I got a little paranoid about being idle on January 1st. Running in this chilly winter weather is ideal so I’m glad I went. I even ran into a friend and her family on the Seal Beach Pier! That was fun. Now it’s time for me to get ready for bed and prepare for my last day of this holiday break. It’s going to be a good one! 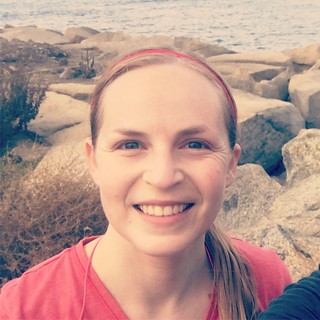 December has flown by and 2017 is almost upon us. Lucky for me I don’t consider the holidays to be over until I have to go back to work. That gives me a few more days to enjoy the season, but not nearly as much as I’d like. To kick off the last three days of my holiday break I woke up early this morning for the first time in about a week. (My sleep schedule has gotten really out of whack since Christmas. That needs to change or I’ll have a lot of trouble making it to work on time on Tuesday morning.) But this morning I needed to run 8 miles with one of my running buddies before the chance of rain increased sharply, so my alarm went off at 6 AM. That waking up portion wasn’t a lot of fun, but we got our 8 miles done and stayed dry. (It’s raining now as I’m writing this so we made a sound decision to run early.) It was my last long run before the marathon next Sunday so that was a bit of an exciting milestone. I can’t believe I’m leaving for Orlando on Friday! After finishing the run I headed to McDonald’s for breakfast. Yes, for a second time in 24 hours. I really need to diversify my meal options. As soon as I got home and logged into my computer I discovered that one of the members of my Galloway running group was looking for a partner for the Run the Year 2017 challenge. It entails one or more people joining forces to run 2017 miles over the next calendar year. Between the two of us we decided it was doable, so we decided to sign up! Not that I really need another challenge in the coming year with all of the crazy races I’m already registered for, but it’ll be fun all the same.

I am headed to a New Year’s Eve party in a few hours, but I wanted to finish this post beforehand. I don’t plan to stay up late tonight so I’d rather not have to worry about blogging when I get home from the party. Plus, I need to be rested for Disneyland tomorrow morning! Last year the parks were so lovely and quiet on the morning of New Year’s Day that I vowed to make a January 1st visit a tradition. It’s hard to believe that it’s nearly time to say goodbye to 2016. I’m grateful for all of the lovely things this year has brought me, but there have been plenty of grief too. I am hoping for a much more positive 2017 for all of my loved ones. Most of us are in a pretty good position at the end of 2016, but we all have wishes and dreams that we’d like to see come true over the next year. Maybe if we’re lucky, one year from now we’ll look back on 2017 fondly. Happy New Year everyone!