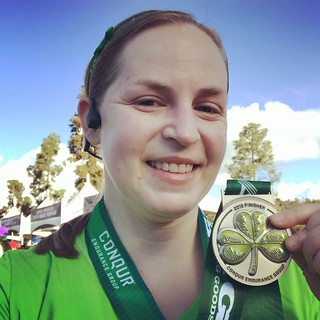 St. Patrick’s Day on the weekend for a change is a rare chance to do something exciting for the holiday without the constraints of a workday. So can you guess what I did today? I ran a race, of course! Big surprise, I know. The Big LA 5K at Dodger Stadium this morning was delightfully St. Patrick’s Day themed with green shirts, green race bibs, and a medal with a shamrock on one side. It was fantastically festive. And I got to wear one of my holiday-specific running shirts for the occasion. It proclaimed my heritage as “Irish Every Day.” Very accurate. Even the weather cooperated (winter finally arrived in Southern California this month and it’s been gorgeous). Everything was great, except for the course. There are some serious hills around Dodger Stadium and they make for less than pleasant running. I’m still getting back in shape after a few months of inactivity so it wasn’t an easy 3.1 miles for my weak body, but I’m so glad that I went out and did it. The LA Big 5K is also the last race in the Triple 5K Tour of LA Challenge (Santa Monica, Pasadena, and Los Angeles) so I got an extra medal at the finish line. That’s always good motivation to get up before the crack of dawn, drive an hour, and hit the course even when I don’t want to! Let’s hope this marks my return to regular running again. 2018 has been rocky so far, but I think it’s looking up. Happy St. Patrick’s Day everyone!

Happy Easter everyone! It’s been far too long since I wrote anything, I know. It’s been a busy month! But before I write anything about this latest holiday let me catch up on some of the events from earlier this month. The good news is that I’m getting back to running regularly again. I’m still pretty out of shape, meaning my lungs feel like they’re on fire when I run at even the slowest possible pace, but at least my leg isn’t hurting anymore. As of my last post I had run one time without pain and the orthopedist gave me the green light to ease back into my normal routine. So that weekend I made a bit of a judgment call (that a friend of mine questioned, actually) and ran two 5Ks, the Country Music 5K in Anaheim on Saturday and the San Diego 5K (in San Diego, of course) on Sunday. I was actually registered for the San Diego Half Marathon, but after not running for a month I knew I wasn’t ready for that distance even if my leg wasn’t bothering me. I’ll try it again next year. I felt great during the 5Ks (with the exception of the burning lungs from having lost all of my endurance), but my leg started bothering me again the next Monday. I was concerned that I did indeed have a stress fracture, which the doctor warned me was a possibility, so I made a follow-up appointment with the orthopedist for the next week. Unfortunately my cold also had a resurgence after those two 5Ks. I guess I was overly ambitious that weekend after being injured since early February and sick since the end of my vacation because I felt horrible on Monday and Tuesday.

The next week was busy as well. Thursday was St. Patrick’s Day so I had to represent my Irish heritage, but I realized that I don’t have a lot of green apparel in my wardrobe these days. My green North Face jacket would have been perfect except the spring weather was too warm to make it a feasible choice. I do have a couple of great St. Patrick’s Day t-shirts, but neither would have been really work-appropriate. (Hello Kitty is perfect on the weekend, but I generally avoid cartoon characters on my clothes when I go to the office. Except maybe on Fridays.) So I donned my dark green pants and a black shirt and decided that the outfit was sufficient for a weekday St. Patrick’s Day. However, just as I was arriving at work that morning one of my co-workers asked me why I wasn’t wearing green. Really? Do green pants not qualify? It turns out the dark green threw a lot of people off that day so I had to defend my St. Patrick’s Day participation a few times, but at least I avoided being pinched. The next day I went for a 5-mile run after work and I’m happy to say that my leg felt mostly fine. I hadn’t seen the orthopedist yet, but I was pretty sure that the lack of pain meant that I didn’t have a stress fracture. This made me really happy because I was registered for the Hot Chocolate 15K in San Diego that Sunday and I really didn’t want to skip it. They have four candy stations along the course! How could I miss that? I knew running 9.3 miles would be a challenge at my current fitness level (or lack of it), but I figured I could complete the race without any ill effects as long as I didn’t push myself too hard. The course turned out to be incredibly hilly and challenging, but I survived and I’m glad I did it. It convinced me that I can ramp up my mileage in preparation for my next half marathon in April. Let’s hope I can put this injury and illness combination completely behind me soon. It’s been long enough!